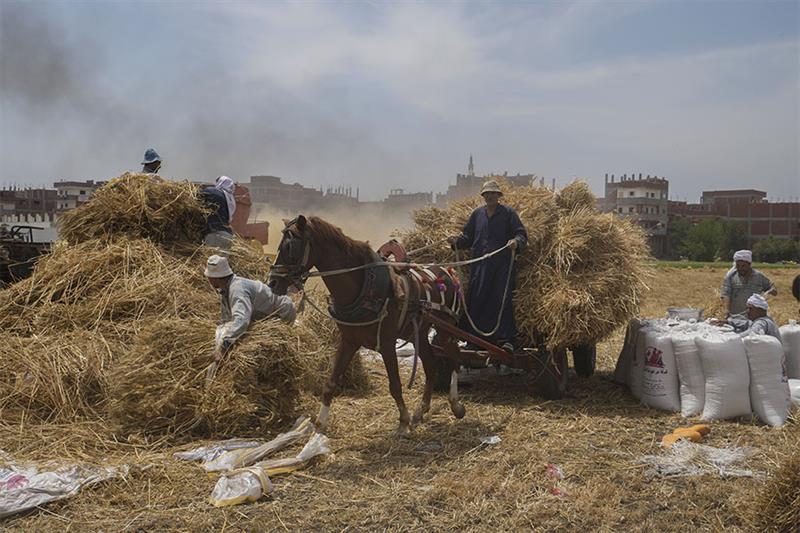 A horse cart driver transports wheat to a mill on a farm in the Nile Delta province of al-Sharqia, Egypt, on May 11, 2022.AP

According to the officials from the Ministry of Agriculture that spoke to Egyptian media, Egyptian authorities refused to receive a shipment of 50,000 tons of Indian wheat coming from Turkey because it did not meet the Egyptian standards due to pest contamination.

In the first week of May, Egypt signed a deal to import 61,500 tons of Indian wheat which arrived at Alexandria on Friday. According to officials, that shipment met Egyptian standards.

Meanwhile, in an interview with Bloomberg in Sharm El-Sheikh Thursday, Egypt’s Minister of Minister of Supply and Internal Trade Ali Moselhi said that Egypt was currently in discussions with India to import wheat in exchange for Egyptian products such as fertilisers.

Moselhi revealed that he met with the Indian ambassador to Cairo on Wednesday to discuss the potential swap agreement to secure 500,000 tons of wheat in multiple shipments.

The Egyptian government is also in talks with the United Arab Emirates, US and various Western European countries over wheat “in a bid to ease any potential shortage,” according to the Bloomberg article.

India has already exempted Egypt from the wheat export ban it imposed in May.

Egypt, the world biggest wheat importer, was hit hard in its wheat supply when Russia invaded Ukraine in late February.

Egypt used to receive about 80 percent of its imported wheat from Russia and Ukraine. Both countries accounted 30 percent of global wheat supply before the invasion.

Egypt imported 12 to 13 million tons of wheat per year, as of 2020, according to the Observatory of Economic Complexity.

The government has announced that it is diversifying its import sources from a new list of countries, at the top of which is India as well as increasing the local supply of wheat.

Egypt’s General Authority for Supply Commodities (GASC) announced on Wednesday that it has signed a contract to purchase 4.65 million tons of wheat from Russia, Bulgaria and Romania in what is reportedly the country’s largest wheat purchase since the start of the Russian invasion of Ukraine.

Egypt is expected to locally source around six million tons of wheat this season – around 3.5 million more than in 2021.

In late May, Moselhi stated that Egypt was planning to do its best to achieve greater self-sufficiency in wheat production, aiming to meet 65 percent of its domestic needs by 2024.

Moselhi also revealed that the Egyptian government has received around three million tons of wheat from local farmers since the start of harvest season in early April which is nearly half the expected total.

He added that the government increased the country’s stock of wheat to cover local consumption until January 2023.