Dubai’s DP World, UK’s CDC to invest up to $320m in Berbera port 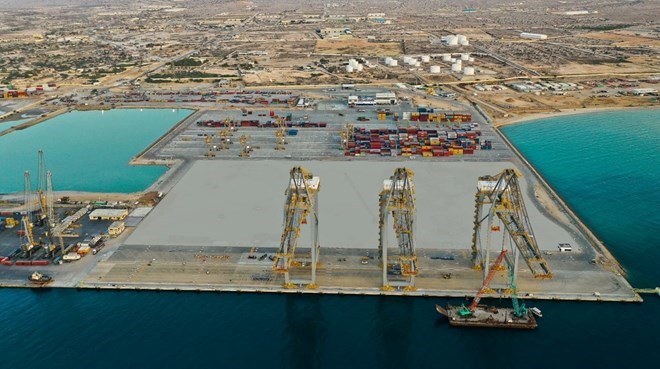 BERBERA (Halbeeg News) – DP World, a world leader in global supply chain solutions, and CDC Group, the UK’s development finance institution and impact investor, are entering a long-term partnership to multiply the capacity of the Port of Berbera and improve surrounding logistics facilities to create a regional trading hub. This will provide a vital economic boost to Somaliland and support growth in the broader Horn of Africa region.

The investment is part of a wider long-term partnership to accelerate Africa’s trade potential and improve the economic prospects of millions of people, starting in the ports of Berbera, Dakar (Senegal) and Sokhna (Egypt).

Africa has a sixth of the world’s population, but accounts for just 4 per cent of global containerised shipping volumes[i]. Ports are vital to the long-term prosperity and wellbeing of people. But many ports and logistics facilities in Africa remain constrained, lacking capacity to meet the needs of local economies.

This partnership, which has been worked towards for four years, will help change that. It will address the stark imbalance in global trade through supporting the modernisation and expansion of ports and inland logistics in Africa. The platform covers a long-term investment period. DP World is contributing its stakes in the three existing ports initially and expects to invest a further $1 billion through the platform over the next several years. CDC is committing approximately $320 million initially and expects to invest up to a further $400 million over the next several years. The transaction is subject to certain final regulatory approvals.

In Somaliland, Berbera port is a cornerstone of the economy and by 2035 is expected to facilitate trade equivalent to nearly 27 per cent of GDP and 75 per cent of total trade, supporting indirectly 53,000 jobs in Somaliland.

The major investment in the port and surrounding logistics will increase the availability and affordability of goods for over a quarter of the population, with the greatest benefit felt by people who are dependent on imported staple food items. Millions of people who live in the wider region will enjoy similar benefits. Berbera port also plays a key role in enabling humanitarian aid to enter the region, reaching close to 2 million refugees and internally displaced populations.

The port will also provide a gateway to international markets for Somaliland businesses and entrepreneurs, as well as supporting the growth of nascent export industries stymied today by logistics inefficiency. A variety of sectors are expected to benefit from the expansion, including exporters of livestock, agricultural and perishable goods, textiles and construction materials.

The port is the first major foreign direct investment (FDI) and the first international non-mineral concession known in Somaliland. The partnership will also invest in a number of associated logistics projects that will further bolster trade capacity, including the Special Economic Zone outside the town of Berbera.

Sultan Ahmed Bin Sulayem, Group Chairman and CEO, DP World, said: “DP World views Africa as a long-term growth market and the opportunity landscape remains significant. This partnership with CDC offers us greater flexibility to accelerate and capitalise on these opportunities, and will enable us to increase our investment in ports and logistics infrastructure across Africa. The partnership will create transformational opportunities for millions of people over the next decade.”

Nick O’Donohoe, Chief Executive Officer, CDC Group, said: “Stable and flourishing economies are built on reliable access to global and intra-continental trade. Africa’s full potential is limited by inadequate ports and trade bottlenecks, putting the brakes on economic growth in some of the world’s fastest growing economies and undermining social resilience in the least developed parts of the world. This platform will help entrepreneurs and businesses accelerate growth with access to reliable trade routes and it will help African consumers benefit from the improved reliability and reduced cost of vital goods and food staples.

“We are proud to support DP World to do even more in Africa, charting a stronger course for African trade around the world.”

Richard Charlton, Investment Director, CDC Group, said: “The ongoing upgrades to trade infrastructure in the Berbera corridor are expected to significantly enhance economic opportunities for businesses in Somaliland, as well as improve the quality of life for Somalilanders by increasing availability and reducing the cost of vital imported goods. It is our hope that CDC’s investment will help demonstrate investability and serve as a catalyst for further private sector FDI in the region. This will foster economic growth in Somaliland and the wider Berbera corridor, creating economic opportunities for local populations.”