The Group CEO of ENOC, HE Saif Humaid Al Falasi, on ENOC’s efforts that have facilitated the Service Station of the Future global recognition

The Emirates National Oil Company (ENOC), which is the Official Integrated Energy Partner at Expo 2020 Dubai, has marked a true innovation in fuel retail construction by completing works on the first station in the region to incorporate an on-grid wind turbine for power generation, and incorporate carbon-fibre in the construction of its canopy.

The 5,841.87m2 “Service Station of the Future” will harness renewable energy through 283 solar photovoltaic (PV) panels installed to generate 140MWh of solar power, in addition to a 25m wind turbine, which will generate 12.7MWh of wind energy annually, within the 4.38km2 World Expo site.

Even a cursory glance at the Service Station of the Future will showcase the intricacy of its design – which is inspired by the UAE’s rich heritage in the form of its national tree, the ghaf. In total, nine “ghaf trees” have been built with an additional 22,500m2 of carbon-fibre.

Sharing exclusive details on the construction of the Service Station of the Future, the Group CEO of ENOC, His Excellency Saif Humaid Al Falasi, tells Construction Week: “We were deeply inspired by the ghaf – our national tree, which is known for its high sustainability and deep roots that make it resilient even in harsh weather conditions.” 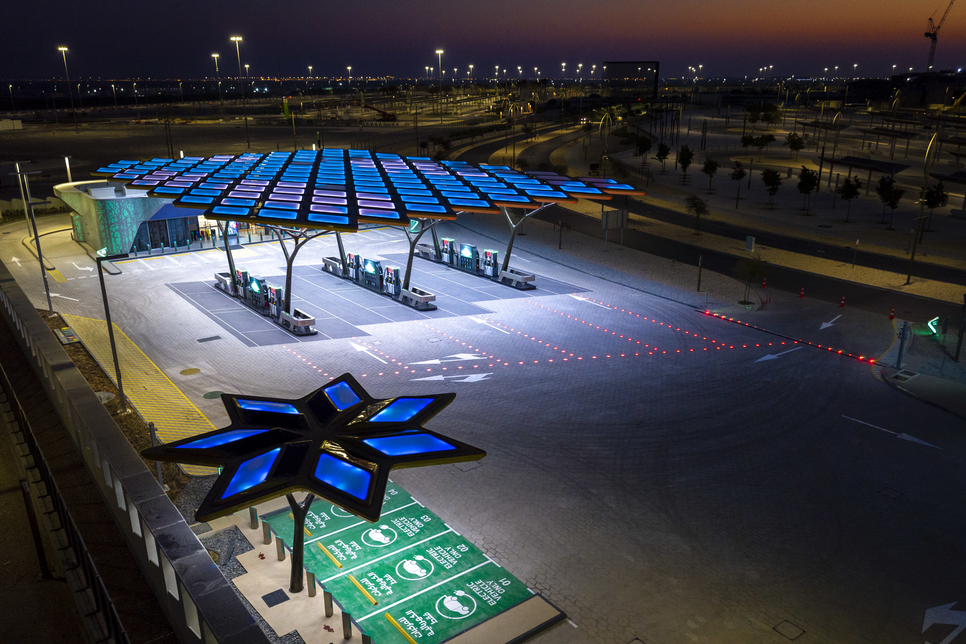 ENOC Service Station of the Future

“The canopy concept includes 133 diamond shaped modules, which are 6.4m long, and span between the tips of the tree branches. There are 102 central modules and 31 edge modules that have integrated around the perimeter for both aesthetic and drainage functions.”

In addition, the structural mass of each central canopy element is an estimated 211kg, with total mass of 481kg including lighting, the ETFE bubble, PV, raised catwalk, as well as MEP cabling.

The mass of the CFRP structure for the whole 1360m2 canopy is 32.5 tonnes and the total mass of the canopy, including all non-structural mass, is 70 tonnes.

Commenting on the incorporation of carbon-fibre rather than steel on the project, HE Al Falasi says: “Carbon-fibre is an eco-friendly, light material, three times stronger and five times lighter than steel. A lightweight and strong canopy was critical to enable the trees to be slender by reducing imposed dead loads and seismic loads on the trees.

“Also, lightweight elements would also be beneficial as they would allow quick installation on-site.  Initial studies showed it was important to integrate the canopy and tree structures so that the canopy could act as a ‘membrane’ providing lateral support to the tips of the tree branches.”

The use of moulded carbon-fibre shells in construction also enabled smooth curved shapes and resulted in a lightweight, stiff canopy.

HE Al Falasi elucidates: “Moulding the canopy shells also allowed integration of the functional and aesthetic lighting and provision of an angled surface for mounting photovoltaic panels on the upper side, which was optimised to give an efficient orientation of the PV panels for electricity generation.”

Due to its strong focus on renewable energy, water efficiency, energy savings, and reduction in CO2 emissions, ENOC’s Service Station of the Future was awarded the LEED Platinum certification – an internationally recognised building certification system from the US Green Building Council (USGBC).

ENOC exceeded the requirements; securing 93 points, making it the first service station in the world to obtain a LEED platinum certification.

Commenting on the achievement, HE Al Falasi adds: “Some of the key highlights that have contributed to securing the LEED certification is that we’ve utilised carbon fibre. The station is designed to generate the energy required to power its operations.

“In addition to the grid PV solar system, and the on-grid wind turbine, we have also incorporated high energy-efficiency ratio (EER) – which is an energy performance rating primarily for cooling devices – as well as Variable Refrigerant Flow (VRF) units with Fresh Air Handling Units (FAHUs) for the HVAC systems.”

“The service station’s systems have been deployed to enhance energy conservation, such as the use of carbon filtration technologies to convert wastewater for irrigation, significantly reducing outdoor water consumption.  In addition, the station is equipped with systems that use ozonation techniques to convert water molecules from humidity in the air into drinkable water for the staff on-site.”

The service station will also include several applications of advanced machine learning (ML), artificial intelligence (AI), and data analytics-based technologies that will help customise services and retail offerings for customers, including managing queues and waiting times at the forecourt.

Commenting on the experience that Expo 2020 Dubai visitors will enjoy at the Service Station of the Future, HE Al Falasi concludes: “Vehicle mapping surface lighting will be deployed to mark traffic flow to direct vehicles to the fuelling area, as well as to the entry and exits of the station.

“Occupation sensors and signals at fuelling positions will also manage traffic flow, redirecting vehicles to empty spaces at dispensers. The digital signage within the station consists of 12 million LED chips to illuminate the screens on-site.

“Other prominent features include electric-vehicle chargers and multi-media interactive advanced dispensers. For enhanced safety, the station will use advanced fuel management and gauging systems that continuously monitor the integrity of the tanks, providing 24-hour leak detection coupled with turbine pump interface monitoring systems.”

The Service Station of the Future is now officially operational for the Expo 2020 Dubai fleet, supporting the logistical needs of the World Expo. It will also serve the general public at District 2020 – a highly accessible, well-connected urban development as part of Expo 2020’s legacy phase.

Extracted in full from: The world’s first LEED-Platinum certified “Service Station of the Future” – Products And Services – Construction Week Online