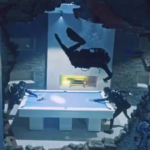 Dubai already boasts over the tallest skyscraper in the world and the largest shopping mall in the world.

This week the city set a new world record for the largest and deepest swimming pool in the world as the largest city in the United Arab Emirates tries to attract tourists again amid the pandemic.

“This pool is 60 meters deep, 15 meters deeper than any other pool in the world and twice as big”, explains Jarod Jablonski, director of Deep Dive Dubai, which manages the project.

He added that the pool opened its doors to the public on Wednesday, while it also contains an underwater city and modern lighting and sound systems that create a different atmosphere.

Located in #Dubai’s Nad Al Sheba neighbourhood, Deep Dive #Dubai’s pool has been verified by @GWR as the world’s deepest swimming pool for diving at an incredible depth of over 60 metres and holding 14 million litres of water, the equivalent of six Olympic-sized swimming pools. pic.twitter.com/zqRZzXNCC9

It contains as much water as six Olympic-sized swimming pools, or 14.6 million liters of water.

The Guinness Book of World Records has confirmed that this is a new world record, which to date has been held by the Deepspot swimming pool in Poland with a depth of over 45 meters.

According to CNN, the water temperature is at 30 degrees Celsius.

Divers can explore it by scuba diving or free diving. An hour-long visit costs from 115 to 345 euros.

In addition, the pool serves as an underwater movie studio – the largest of its kind in the area, according to CNN.