Dubai labourers to get ‘excellence cards’ 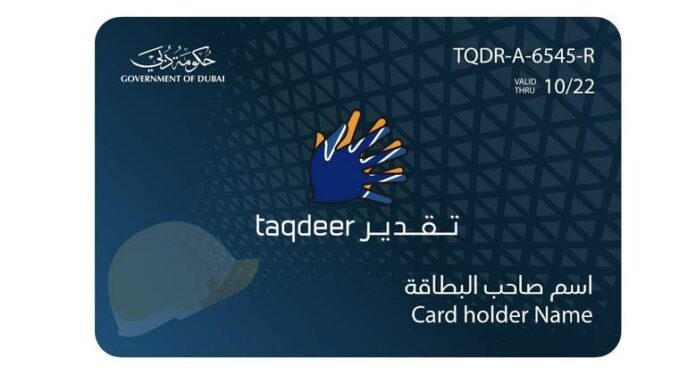 The UAE News report: Dubai is launching ‘excellence cards’ for labourers offering them incentives and discounts at government agencies and malls and commercial establishments across the emirate.

Launched under the patronage of Sheikh Hamdan bin Mohammed bin Rashid Al Maktoum, Dubai Crown Prince and Chairman of The Executive Council of Dubai, the new initiative forms part of the emirate’s efforts to enhance the welfare of workers and raise benchmarks in labour practices.

In its initial phase, these cards will be given to 15 major national and international companies that won 4- and 5-star ratings in the fourth edition of the Taqdeer Award in 2020 as well as 50,000 workers of these companies.

Major General Obaid Muhair bin Surour, chairman of Taqdeer Award, chairman of the Permanent Committee for Labour Affairs (PCLA) in Dubai and deputy director of the general of the GDRFA-Dubai said the project features two types of cards. “The first is a Gold Card that will be awarded to companies with four- and five-star ratings to obtain the incentives provided by government departments, while the second is a blue card. This card will enable eligible workers to obtain special discounts from malls and commercial establishments located near their labour accommodations,” said Major Surour.

He said the total value of discounts provided by malls, commercial establishments and national and international private companies amounts to millions of dirhams.

The announcement, set to be made at a gala award ceremony to be held on May 17 at the Rashid Hall of the Dubai World Trade Centre (DWTC), seeks to recognise contributions of companies who received four- and five- star ratings in the Taqdeer Award’s fourth edition last year, as well as their workers.

The project will also feature a wide range of incentives and discounts extended by private institutions for workers belonging to these companies, he added.

Benefits for companies include – discounts ranging from 25 to 50 per cent on fees for the submission of tender documents to several government bodies, additional points for the engineering excellence initiative within the technical evaluation process for contractors and consultants in Dubai Municipality projects under the specific criteria of the building permits department, and waiver of renewal fees for professional competence certificates for engineers for a renewable period of a year.

Other incentives include membership in GDRFA–Dubai’s Innovation and Creativity Center that will allow the workers and companies to take advantage of its services; special facilities for registering intellectual property; free virtual training courses at DEWA Academy; free NoL cards for workers; and opportunities for companies to place an advertisement on Dubai Metro Station display boards.

Major Khaled Ismail, secretary-general of the sward, said, “As the award is organised once every two years, the advantages of the Excellence Cards will continue throughout these two years. The benefits and discounts are then given to new winners in the next editions of the award.”

The winning companies can register on the Award’s website to obtain government incentives, while the award team will coordinate with government agencies and private institutions to ensure eligible workers can take advantage of the incentives. The award team will hold a workshop to brief the winning companies and workers on how they can take advantage of the Excellence Card. – abdulbasit@theuaenews.com