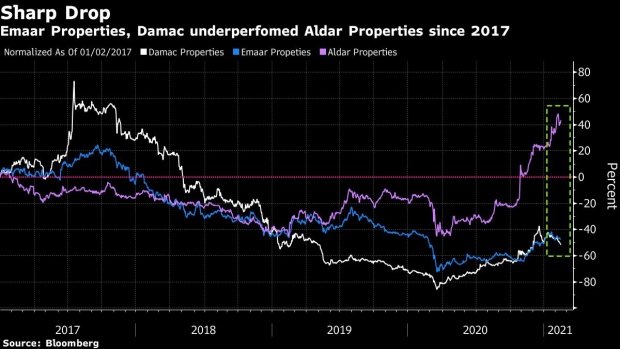 The Burj Khalifa skyscraper, center, stands on the city skyline beyond new skyscrapers under construction in Dubai, United Arab Emirates, on Tuesday, Sept. 12, 2017. Dubai residential property prices and rents are set to fall further as losses of high-paying jobs and dwindling household incomes boost vacancies across the city, according to Phidar Advisory. Photographer: Tasneem Alsultan/Bloomberg , Bloomberg

The fortunes of property developers in Dubai and Abu Dhabi diverged last year.

Dubai’s Emaar Properties PJSC reported a 58% slump in profit, while Damac Properties PJSC posted its second consecutive full-year loss — underscoring the impact of an oversupply aggravated by the coronavirus pandemic.

Aldar Properties PJSC in neighboring Abu Dhabi, however, performed better than Emaar and Damac. It posted a profit that was almost unchanged from a year ago as it benefits from government contracts.

A property glut and faltering demand have driven Dubai home prices down by more than 30% since the market peaked seven years ago, a decline made worse by the pandemic. The government last year set up a committee to manage supply and demand, while property developers temporarily halted new projects.