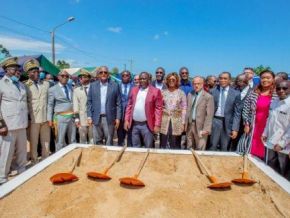 (Ecofin Agency) – The Ivorian government will spend CFA308 billion ($550 million) to rehabilitate the “Coastal Road” which links Abidjan to San Pedro. The announcement was made last September 18 by the Prime Minister, Patrick Achi, at the launching ceremony.

The soon-to-be-rehabilitated road, which connects the country’s two port cities, has been suffering advanced degradation for several years. The situation weighed on the economy, tourism, and sports, and also on sub-regional integration.

The rehabilitation work takes into account three road sections, including Songon – Dabou – Grand-Lahou (93 Km); Grand-Lahou – Fresco (80 Km), and Fresco – Sassandra – San Pedro – Grand-Béréby (180.5 Km). “The localities crossed by the sections will benefit from a linear road of 72 km, including 25 km in the town of San Pedro,” the PM explained.

The work is scheduled for completion in December 2022, shortly before the launch of the 2023 African Cup of Nations, which will be held in both cities (Abidjan and San Pedro).