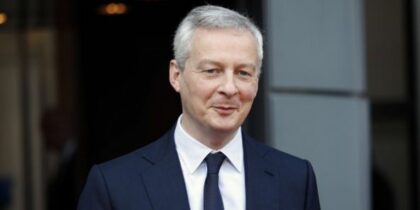 The French Minister of the Economy, Bruno Le Maire is visiting Abidjan for two days. Bilateral issues are on the agenda.
The Minister of Economy arrived Wednesday evening in Abidjan. Officially, this trip will be an opportunity to strengthen Franco-Ivorian economic and financial cooperation. Bruno Le Maire exchanged this morning with his counterpart Adama Coulibaly on the third part of the debt reduction and development contract (CDD). The two men also discussed the conditions for economic recovery after the global shock induced by the Covid-19 pandemic. Bruno Le Maire was also pleased this morning that Côte d’Ivoire has withstood the crisis better than other countries, a country that is considered a pillar of economic success in Africa.
Bruno Le Maire’s visit to Côte d’Ivoire is part of the preparation of the Summit on the financing of African economies to be held on May 18 in Paris. A summit which, according to the French Minister, aims to help African countries to face the economic crisis linked to the pandemic, thanks to new financial mechanisms. “You know my fear, which I have expressed on several occasions: it is that of a great divergence between developed countries that would recover very quickly after the economic crisis – the United States, the European continent, China – and other countries that would remain in greater difficulty, particularly on the African continent in the wake of the economic crisis. This great divergence would be an economic mistake and a political danger. ”
The French Minister of the Economy will also address the issue of the Abidjan metro project, the construction of which has been entrusted to a consortium led by the French company Bouygues for 1.36 billion euros. The construction work, initially planned for the beginning of 2020, has not yet started. The contract has yet to be finalized due to several stumbling blocks, such as the financing of the project and the provision of land by the Ivorian state.
“The first difficulty is very important: expropriations or evictions – use the word you prefer. These things are obviously very difficult and take time. And the Minister of Transport has told me that it would indeed take a few months before these evictions can take place, before the expropriations can take place. “The French minister will visit a portion of the future route this afternoon, accompanied by the Ivorian Minister of Equipment Amedée Kouakou. Bruno Le Maire is counting “on the total determination of the Ivorian government to accelerate the project.
Among the major infrastructure works carried out by French companies, there is also the extension of Abidjan airport, also entrusted to the Bouygues group. These issues will be discussed with Amadou Koné, the Minister of Transport. This Friday, Bruno Le Maire will meet with Ivorian President Alassane Ouattara and Prime Minister Patrick Achi.