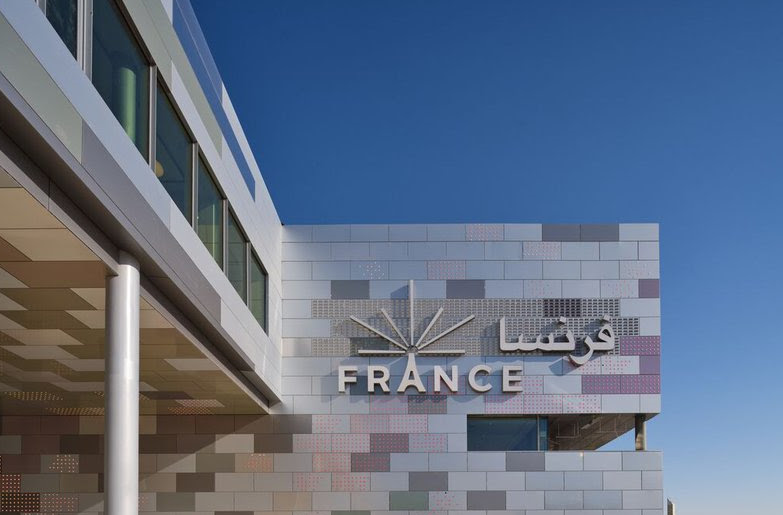 BESIX Group has completed the construction and delivered the French Pavilion for the Dubai World Expo.

The delivery of the Pavilion was made official by Reem Al Hashimi, Minister of State and Director General of the Dubai 2020 World Expo, Franck Riester, Minister Delegate to the Minister of Europe and Foreign Affairs, in charge of Foreign Trade and Attractiveness, and Erik Linquier, Commissioner General for France at the Dubai World Expo and President of Cofrex.

Designed by the architectural firms Atelier Perez Prado and Celnikier & Grabli Architects and the design office OTE Ingénierie on the specific theme of “Lumière, Lumières” (“Light, Lights”), the French Pavilion reflects the commitment of the French Republic to be an actor of change for an ambitious ecological transition.

The French Pavilion is an example of respect for the principles of bioclimatic architecture.
This is reflected, for example, in the choice of materials and a circular approach, considerably limiting the building’s carbon footprint. One of the particularities of the Pavilion is its ability to be dismantled and reused.

The building will also be almost self-sufficient in energy during the six months of the World Expo, combining low energy equipment with renewable energy, produced by the 2,500 m² of solar tiles integrated into its façade.

For the construction of the building, BESIX France, as leader of the consortium for the design and execution, was able to count on the services of Six Construct, BESIX Group’s Middle East subsidiary. The complementarity of the teams in Paris and Dubai was a key factor in the success of the project.

Rik Vandenberghe, CEO of BESIX Group : “BESIX is extremely proud to have contributed to the construction of the French Pavilion, a stunning building, both architecturally and environmentally. It will be a major landmark at the Dubai World Expo. I would like to express my sincere thanks to all the stakeholders for their confidence, and in particular to the French Republic. The philosophy of the French Pavilion reflects a deep conviction of BESIX: if the construction sector is today a major cause of our collective carbon footprint, it also lies at the heart of the solution. This is why we have been developing cutting-edge expertise in circularity and the energy performance of buildings and infrastructures for several years. The French Pavilion itself carries these messages in a remarkable way”.

In addition to its eco-building qualities, the French Pavilion features various technical feats, including a spectacular 1,800 m² interior façade. Its panoramic terrace also offers a unique view of the Expo site.