Conor McGregor got his calf torn up and was knocked out by Dustin Poirier last month at UFC 257 in Abu Dhabi, but at least he didn’t leave the United Arab Emirates without having a good steak – from the one and only “Salt Bae,” at that.

If you need a reminder on who “Salt Bae” is, his real name is Nusret Gokce. He’s the Turkish chef and butcher who rose to internet fame in January 2017 for the way he suavely slices steak and sprinkles salt on his meat.

Do you remember this going viral:

Anyway, Gokce has a pretty sizeable net worth and owns about a dozen restaurants worldwide, including two Nusr-Et locations in Abu Dhabi and Dubai. The latter location’s official Instagram shared a video of Gokce doing his “Salt Bae” slicing act in front of a giddy McGregor before serving up the UFC star.

For the record, yes, that is a marbled wagyu steak wrapped in edible 24-karat gold. In case you’re wondering, it’s $1,000 for one.

Even when McGregor loses, he still wins.

The Blue Corner is MMA Junkie’s blog space. We don’t take it overly serious, and neither should you. If you come complaining to us that something you read here is not hard-hitting news, expect to have the previous sentence repeated in ALL CAPS. 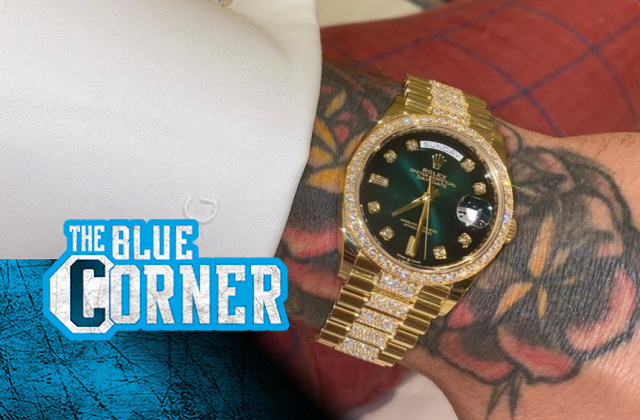