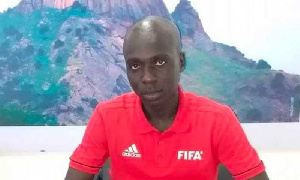 The Confederation of Africa Football (CAF) has appointed Chadian Alhadi Allaou Mahamat as the centre referee for the Total U-20 Africa Cup of Nations quarter-final match between Cameroon and Ghana on Thursday, in Mauritania.

Wajdi Aouadi from Tunisia would serve as Match Commissioner.

The game would take place at Office du Complexe Olympique in Nouakchott on Thursday, February 25 at 16H00.