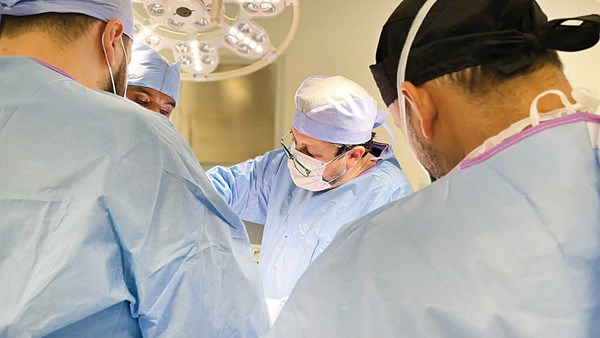 A medical team in Dubai was able to achieve a medical achievement in the world by building the facial bones of a young Emirati patient with cancer using 3D printing technology and by surgical operations considered to be the first of their kind in world.
The management of Emirates Hospital, Jumeirah, in Dubai, said it had received a 20-year-old Emirati young man, with rare and multiple tumors on his face called “corneal cysts”, which caused complete destruction of the facial bones. severe disfigurement, difficulty speaking and breathing and eating normally.
The medical team at the hospital led by Dr. Jihad Al-Sukhun, an oral and maxillofacial surgeon, diagnosed the condition through a series of medical examinations using CT scans, MRI scans and biopsies, followed by a series of surgeries to remove the tumor and rebuild the facial bones.
Dr. Jihad Al-Sukhon said: In line with Dubai’s strategy to take advantage of 3D printing technology in various aspects of life, we used 3D printing technology for the first time to design and print titanium face fillings to rebuild facial bones and restore bones through multiple surgeries. in the patient’s face, which had recovered well with good aesthetic results. He added, “The success of this type of 3D printing technique opens the door to the introduction of” biological metallic facial “techniques to save cases of bone deformities due to tumors.
He continued, “This is the first case in the world where these techniques are used to salvage facial deformity and rebuild bone defects by using titanium fillings of this size compared to other techniques.”