The first-ever BSV Global Blockchain Convention taking place at the Grand Hyatt, Dubai from May 24 to 26 is off to a great start with a powerful opening speech that sums up what the three-day event is about.

The convention opens with a video introduction from billionaire and philanthropist Calvin Ayre, who is the founder of CoinGeek and Ayre Group.

Ayre begins with listing down some of the momentous events that show the undeniable technological prowess of the BSV Blockchain. After restoring the original Bitcoin protocol and unlocking limitless scaling in February 2020, the network has continued to scale and improve its capabilities.

And these are shown in the record-breaking over 20 million total daily transactions in April. On April 10, another global record was made with 2.4 million transactions in a single block. The block size hard cap has also been increased to 4GB; and fees are averaging from 1/100 to 1/20 of a cent per transaction.

NFTs make up a lot of these transactions, and with fees that can hardly be felt, saying that it is a practical way to create and profit from NFTs is an understatement. And this is an example of what the BSV Global Blockchain Convention is hoping to educate both individuals and enterprises.

“It’s worth noting that BSV stands apart from other blockchains in having the capacity to store NFTs on chain, rather than a hyperlink to an off-chain storage mechanism utterly lacking in permanence that only blockchain technology can guarantee,” Ayre said.

“This fact goes largely unmentioned by NFT projects on other chains—likely because they recognize how difficult this promotion would be if the general public understood the discrepancy,” Ayre added.

The fact that creating NFTs on the BSV Blockchain is something that amateur artists, big businesses and even charitable organizations can greatly benefit from is generally being left out of mainstream cryptocurrency and technology news can be attributed to other blockchains being afraid of being left out and potentially going out of business.

“BSV’s on-chain scaling capacity also makes it the perfect platform for the end-to-end model of the Internet under IPv6. Just as BSV restored Bitcoin’s original architecture, IPv6 is restoring the Internet’s original design through true peer-to-peer communication with no intermediary charging at all,” Ayre said.

Other blockchains like BTC, Ethereum and Solana have shown their inefficiencies in the past year alone with sky-high transaction fees, network crashes and failed transactions collectively amounting to the loss of millions of dollars, demonstrating how they cannot handle IPv6.

The BSV Blockchain: A World of Good

BSV Blockchain Association President Jimmy Nguyen, who is also the host of the convention, then presents his opening speech live at the venue, rendering the audience in awe at the simple logic behind using a blockchain that is capable of limitless scaling.

Nguyen likens the decision to adopt the BSV Blockchain, the largest public blockchain that can scale limitlessly to meet constantly increasing market demands, to something he would do after heeding his parents’ advice. His parents, who have been married for 59 years, immigrated from Vietnam to Southern California in 1975.

“They had to live in a new country with a new environment, a new language, new challenges, but also as they told me and my siblings as young children, now potential—a new chance, new opportunity. What are we going to do with it? What kind of life and world do we want,” Nguyen shared.

“Those are questions I have used to guide my own professional life—from being a lawyer at the height of the dot-com boom in the 1990s for two decades and then getting into the blockchain industry. And these are questions I want you to ask in the next three days. What kind of industry, what kind of world do we want with digital assets and blockchain,” Nguyen added. 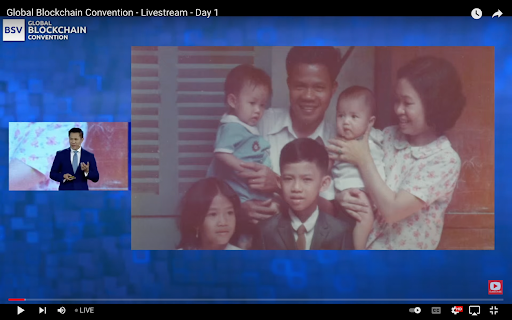 And the answer is very simple. Just like how the Internet has scaled to meet what the people need over the years—continuously improving speeds from 56 kbps to 2,000 mbps—people would want a blockchain that can scale to accommodate the gigantic amount of data being generated by the 4.66 billion Internet users recorded last year.

Although BSV’s numbers at present, 4GB blocks at 50,000 to 100,000 transactions per second (tps), are not enough to cover these 4.66 billion users, the fact that it has the ability to keep on improving these numbers is a huge factor. Because with BSV, terabyte-sized blocks at millions of tps are real possibilities in the future.

BSV’s unbounded scaling certainly trumps that of BTC’s very limited 1MB blocks and seven tps, as well as Ethereum’s 70 tps. Both are trying to create second- and third-tier solutions to compensate for the reality that their base layer—the blockchain—cannot scale. And these solutions have not been working, as evidenced by frequent network congestion that has caused network crashes, failed transactions and high transaction fees.

“The other practical impact of this scaling journey is that it’s necessary to create blockchain systems for the world that do good to actually make it useful at inexpensive fees, so everyone can use it, not just wealthy people. The BTC network, because its capacity is so small, is congested and the cost to send a transaction from me, the sender, to you, which gets earned by the miners or validators on the network, is both very high and unreliable,” Nguyen pointed out.

It is not enough to scale and achieve these record-breaking figures if it would cost a lot to transact using the BSV Blockchain. But increasing block size and throughput has an inverse effect on fees. As the network scales, the fees only become smaller, and 1/1000 of a cent per transaction can happen in the future.

These are the powerful and very real capabilities of the BSV Blockchain. These statements are backed by numbers and the fact that hundreds of businesses from across many different industries are currently using and building on the BSV Blockchain.

The BSV Global Blockchain Convention is being held to educate about all the good a scalable blockchain can do for the world. Be one of the woke. Watch the three-day convention live streamed for free here.