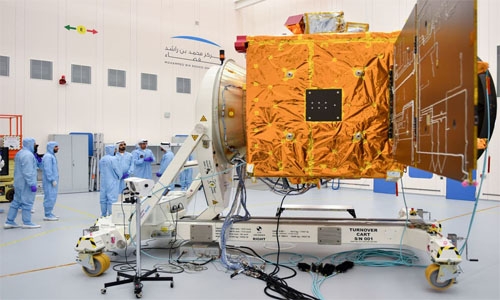 Today, history and the hopes of the Arab world will hang on the endurance and independence of six engines charged with steering an SUV-sized spacecraft into orbit around Mars.

The UAE launched that spacecraft, dubbed Hope, in July 2020, lofting its first interplanetary mission a little more than a decade after becoming a spacefaring nation at all.

After a seven-month cruise, the UAE is preparing for Hope’s arrival at the Red Planet today.

The Bahrain TV coverage will include especially news reports which will shed light on the UAE historical achievement.

He commended continued cooperation between the Ministry of Information Affairs, the National Media Council and the Mohammed bin Rashid Space Centre (MBRSC) to cover the historical event.

The Hope’s arrival at Mars is a complex manoeuvre that requires the spacecraft to complete an intense engine burn with no support from the mission’s engineers, who are left anxiously awaiting bulletins that the solar system’s geometry delays by 10 minutes.

“What that means is 27 minutes of burning fuel, of using our thrusters, of the spacecraft undergoing one of the toughest challenges that it’s been designed for,” Sarah Al Amiri, chairperson of the UAE Space Agency, said during a virtual event hosted by the US-UAE Business Council based in Washington.

Formally called Mars Orbit Insertion, today’s milestone will allow the Hope team to turn its focus to science while making the UAE the fifth entity to orbit the Red Planet.