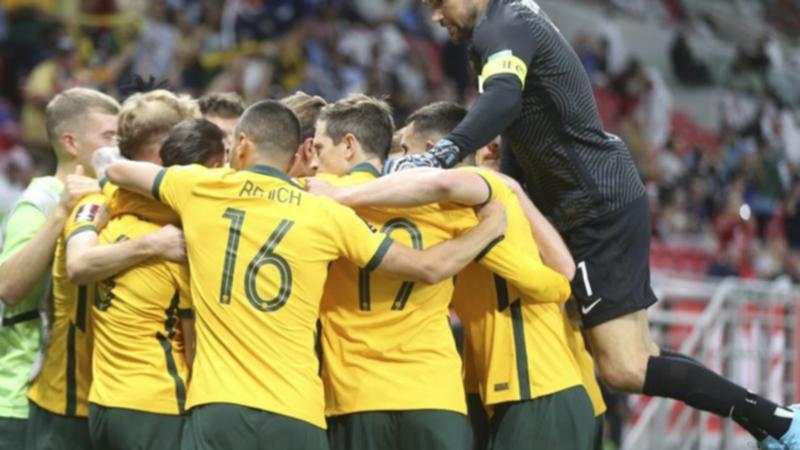 Rising star Ajdin Hrustic has put Australia one game from a fifth-consecutive World Cup finals appearance, scoring a late winner as the Socceroos defeated the United Arab Emirates 2-1 in their play-off in Qatar.

Hrustic’s 84th minute strike, which took a heavy deflection on its way into the net, came after Jackson Irvine had opened the scoring for the Socceroos in the 53rd minute of Tuesday’s (Weds AEST) match at the Ahmad bin Ali Stadium in Doha.

Irvine’s strike was almost immediately cancelled out by Caio Canedo’s equaliser for the UAE in the 57th minute but Graham Arnold’s men rallied to find the winner.

Australia will now face Peru in next week’s inter-continental play-off in Qatar, with the winner of that match moving on to November’s finals.

Despite Arnold’s pre-game insistence his team needed to bring out their nasty side, Australia were oddly passive in the opening half.

The Socceroos failed to muster a shot on target in a cagey display as lively winger Harib Abdalla tormented right-back Nathaniel Atkinson.

Abdalla twice ran free down the left in the opening half only to be denied both times by Socceroos goalkeeper Maty Ryan.

That pattern repeated early in the second half when Abdalla bolted free past Bailey Wright and Atkinson, only to again be thwarted by Ryan.

Irvine opened the scoring in the 53rd minute when Martin Boyle found space inside the box and crossed for the midfielder to sweep home from point-blank range.

Australia’s lead didn’t last long however, Canedo lashing home from the edge of the six-yard area after the Socceroos failed to deal with an Abdalla cross just four minutes later.

Craig Goodwin had a great opportunity to restore Australia’s lead in the 60th minute after he was found unmarked at the back post but the Adelaide United winger blazed his effort over the bar.

Substitute Jamie Maclaren also forced UAE goalkeeper Khalid Eisa into a sharp one-handed save in the 80th minute as Australia pressed for a late winner.

That winner came when Hrustic’s 84th-minute shot from the edge of the box took a heavy deflection off Ali Salmeen to leave Eisa stranded.