As much of the world continues to delay large-scale gatherings, the organizers of Art Dubai announced in an email blast that it would tweak its in-person fair for this year, which is currently set to open in March.

The main change is that the fair will now take place 12 days later than originally scheduled and run for two extra days, from March 29 to April 3, instead of from March 17 to March 20. For the upcoming iteration, Art Dubai will also change venues, moving from the hotel Madinat Jumeirah to a “purpose-built venue” in the Gate Building at Dubai International Financial Centre. Additionally, the fair said that it might operate by appointment only, though a decision would be made closer to the opening. 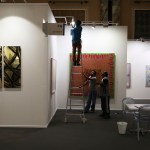 Additionally, the number of galleries that will show at Art Dubai has also been scaled back. There will now be 45, as opposed to the 85 exhibitors from 36 countries announced in December. Among those that had planned to have a booth in the 2021 fair were Addis Fine Art (Addis Ababa and London), Gallery 1957 (Accra), Experimenter (Kolkata), Galerie Krinzinger (Vienna), Zilberman Gallery (Istanbul and Berlin), and Sfeir-Semler Gallery (Beirut and Hamburg), as well as several Dubai-based outfits. According to its website, the fair will release an updated list on February 21.

“The arts sector has, like so many others, been heavily impacted by the events of the last 12 months and we feel, along with our partners a keen responsibility to do everything we possibly can to support our communities at this time,” Art Dubai’s email statement reads. “Having consulted all our stakeholders and taken into account a wide range of factors we remain confident in producing a physical edition of this year’s fair.”

The United Arab Emirates has had a total of 358,583 coronavirus cases, with a total of 1,055 deaths from the virus, according to the New York Times’s coronavirus tracker. The country’s daily average over the past seven days was 3,218 as of Wednesday. The Times also reported that the U.A.E., which has a population of 9.7 million as of 2019, according to the World Bank, has vaccinated around 5.2 million people.

Art Dubai’s statement added, “In view of the UAE having the second most advanced vaccination programme in the world, we are hopeful that by the end of March we will be operating in a more open environment.”