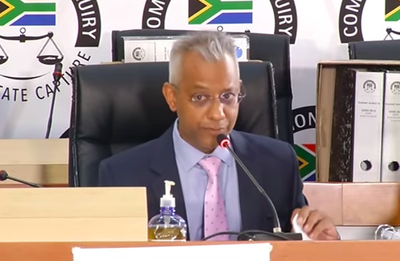 Singh was back at the commission of inquiry into state capture on Tuesday.

He has been implicated in state capture at both Eskom and Transnet and is alleged to have aided the Guptas, through their associates, to loot state-owned companies.

According to travel agents Travel Excellence, Singh went to Dubai between 3 and 8 June 2014.

Advocate Pule Seleka noted that while Singh travelled to Dubai with his wife, other Gupta-linked associates, as well as Rajesh Gupta, were in Dubai.

This trip was allegedly paid for by known Gupta associate Salim Essa.

But Singh has denied this.

“I can categorically state that Mr Essa would have not requested travel on my behalf,” he told the commission.

He added that he could not have been on a trip sponsored by Essa and the Guptas, as he only landed in Dubai on 3 June and left on the 8th.

The travel agency estimates the trip cost at least R60 000.

While Singh was adamant that its not the correct amount, he couldn’t provide the proof of his payment to Travel Excellence as his bank accounts have been closed and he does not have any documents related to this trip.

He undertook another trip in November of the same year,  with Singh confirming that he made the booking himself with the same agency.

The agency said to the commission in an affidavit that this trip cost R55 775, an amount which was charged to Essa’s account.

They further said Singh informed them that a driver would arrive and pay the bill in cash.

“Mr Chair, I would have paid for this but in terms of the method of payment I would have to check,” said Singh.

He did admit that it’s possible that he sent a driver to pay the bill in cash.

Singh also told the commission that it is possible the travel agency kept putting his trips under Essa’s bill despite the fact that he paid for it himself.