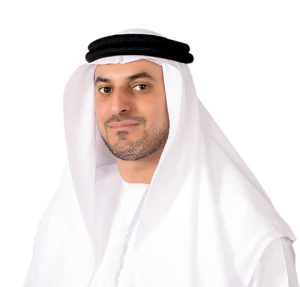 Supporting priority sectors and opening up new horizons for businesses in Abu Dhabi and Portugal came at the top of discussions between Mohamed Helal Al Mheiri, Director-General of Abu Dhabi Chamber of Commerce and Industry, and Fernando Figueirinhas, Ambassador of Portugal to the UAE.
The meeting took place at the chamber’s tower in Abu Dhabi and was attended by Abu Dhabi Chamber Deputies Director-General Abdullah Ghurair Al Qubaisi and Helal Mohammed Al Hameli.
During the meeting Al Mheiri commended the deep relations between the business communities in Abu Dhabi and Portugal, noting that the visit of Ambassador Figueirinhas allowed the chamber to introduce its services and roles in promoting the economy of Abu Dhabi and build stronger relations between the two sides.
“The Abu Dhabi Chamber is seeking proper opportunities for its members,” Al Mheiri said, pointing to the need of coordination with the related authorities in Portugal to allow Emirati businesses explore the most promising business opportunities that help increase trade and open up new channels of economic cooperation. “It is imperative to take advantage of all the economic strength factors to be able to realise comprehensive development for the people of both countries,” he explained.
For his part, Ambassador Figueirinhas commended the chamber’s readiness to cooperate with his embassy to better serve the economic relations between the two sides, noting that Portugal offers many investment facilities for foreign investors.
The ambassador added that his meeting with the Abu Dhabi Chamber would be a starting point towards more prosperous economic partnerships between the business community in Abu Dhabi and that of Portugal.