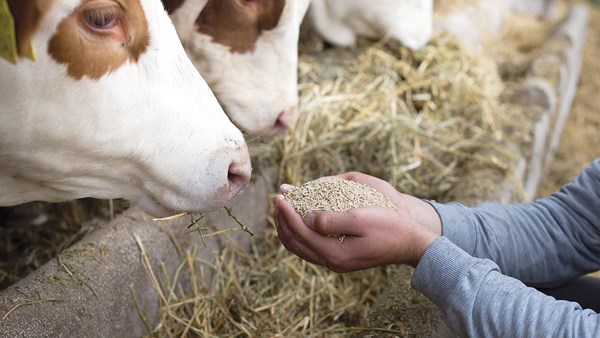 The Abu Dhabi Agriculture and Food Safety Authority urged livestock farmers to diversify food sources for livestock and not be satisfied with one or two types, including fresh green fodder. Concentrated, which includes “cereals and mixed, bulk and feed mixtures”, especially in view of the high feed prices globally.It is preferable to provide concentrated feed for two meals “morning and evening”, as it increases the production of meat and milk and increases the reproductive efficiency and fertility of herds.
During the information symposium organized by the authority on the “role of concentrated feed in animal feed”, the authority pointed out that there are 4 types of feed that ruminants live on, “fresh green feed”, such as green jet and “dried feed. Green feed,” such as rhodes and dry jet. Which is characterized by a high percentage of protein, and stuffing “hay and grass”, which is low in nutritional value but necessary for the animal, as it makes it feel full, in addition to the fourth type, which is concentrate, which includes cereals and mixtures, bulk and feed mixtures.
The authority identified 3 main factors for the importance of diversifying food sources, which is reflected in animal health and the economy, and the first factor includes: Diversity in feeding animals with different types of fillings, green and concentrated feed, addition of vitamins and mineral elements, whether it is with feed or in drinking water, is one of the things needed to increase efficiency. Crew reproduction and productivity, and the second factor confirms that dependence on one type of feed adversely affects the halal, rather it causes problems with digestion and absorption, and the third factor indicates the need to take into account the addition of important mineral elements, which , if reduced, will show negative effects on the general health of the animal, reducing its productivity.
The authority explained that ensuring the use of concentrated feed in balanced amounts helps to achieve 6 benefits for educators, including: increasing fertility for women and men, maintaining maternal health and preventing them from being exposed to poisoning, maintaining the rate of Fetal growth and mothers. give birth naturally and reduce deaths and dystocia for mothers. Those suffering from malnutrition, increased birth weight, increased growth rates, increased fattening efficiency, increased meat productivity, increased milk yield and finally maintaining the general health of the animals and increased their immunity to exposure to disease.
Dr. Ahmed Essawi, an animal production specialist at the authority, emphasized during the information seminar the effective role that concentrated feed plays in halal breeding, and pointed out the importance of diversity among the 4 feed types “green, dry, saturating and saturating feed”. concentrates. ” Concentrates mean grains … especially with the high global feed prices, which require finding effective and economical solutions to protect growers from loss.
He stated that dependence on one type of feed is harmful to halal and causes digestive problems and affects absorption as well as affects animal productivity, as concentrated feed is rich in protein and at all useful in meeting the needs of the animals. and to meet its production needs, it must not be less than 30% of its total needs … and twice a day .. It is preferable to use bulk feeds, which include cereals, maize and hay, rather than cubes, as it is easy for the animal.
He pointed out that after the follow-up, there is a noticeable decrease in the productivity of the animals due to lack of attention to concentrates. He stressed that before the breeding season it is necessary to focus on the addition of concentrates, as it preserves the health of mothers and is reflected in the newborns as well as protects them from pregnancy poisoning .. It also increases fertility rates.
Concentrated feed also maintains the health of mothers and animals and increases their immunity and is thus reflected on the newborns and the amount of their milk production, which requires that one is not dependent on one type of feed, which is consistent with the abilities of the breeder. and specify the amount of animal needs according to age, as Gradually, due to the different needs of each animal, whether it is allowed for fattening or breeding.

Rising prices
Ahmed Essawi pointed out the high prices of feed and it is unreasonable to keep unproductive halal because it causes loss to the breeder and therefore it is necessary to rotate the herd and register and number the whole herd to know the performance of the halal. and the productivity of each head and to get rid of sheep or unproductive animals to reduce costs, and pointed out that soy flour is useful for halal, and to add it with 5% of the amount of feed helps to increase productivity .. He advised leaving newborns under their mothers and not separating them, and at weaning a ration is added to compensate for the possible lack of weaning.