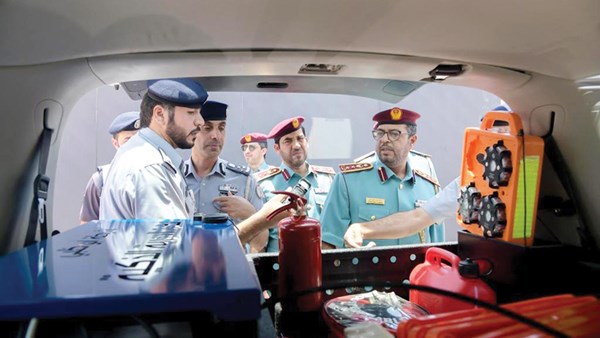 A delegation from the Fujairah Police was briefed on the development efforts, best practices and benchmarks used in the Directorate of Transport and Patrol in Abu Dhabi’s central operations sector.
Brigadier General Muhammad Dhahi Al-Humairi, Director of the Directorate of Transport and Patrols, discussed with the visiting delegation led by Colonel Saif Rashid Al-Zahmi, Director of the Dibba Al-Fujairah Police Department, ways to strengthen cooperation and exchange experiences in areas of common interest in connection with efforts to increase road safety.
The delegation listened to an explanation of the best practices followed, the patrols ‘work system, tasks and duties, the directorate’s organizational structure, the policies related to the task patrols’ work, measurement indicators, strategic objectives, programs and support systems, surveys, statistics and traffic plans. During the tour, the visiting delegation was briefed on the mechanism for receiving and delivering security patrols in the Mechanisms Affairs Branch, the programs and systems used, the smart patrol, the systems and devices equipped with it, the working mechanism and systems used in the Safe City Department , and the operations platform’s tasks in operations management.