17 billion dirhams, gains in Abu Dhabi shares in the first trading of the week 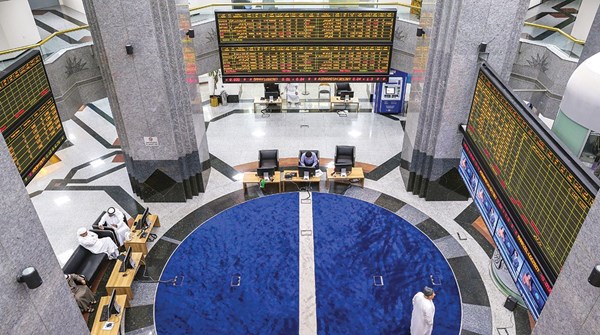 The capital market, Abu Dhabi, opened the week’s trading with significant gains amounting to 17.5 billion dirhams in the market value of the listed companies, which it achieved during the first session yesterday, as a result of the increase in the general index of the market by 0.43%.
The general index of the market closed at the level of 6993.3 points, while the market value of the listed joint-stock companies amounted to 1.2335 trillion dirhams, according to the official closing prices yesterday, compared to 1.216 trillion dirhams, the market value of the registered companies listed in the market at the end of last Thursday’s session.
Trading continued at high levels, supported by the liquidity available to the market, which amounted to 1.28 billion dirhams.
The session witnessed the conclusion of 4732 deals, and trading on the General Holding Company remained in the lead, with a value of 345 million dirhams, although its price remained stable at the level of 126.3 dirhams, followed by trading on the shares of First Abu Dhabi Bank, with a value of 276 million dirhams, which recorded a slight decrease in its market price at the closing level. amounting to 16.28 dirhams, down by 0.49%. Trading in the shares of Aldar Properties came in at 258 million dirhams, and its share price rose to 3.81 dirhams, by 0.26%.
In addition, the Abu Dhabi Securities Exchange announced that the listing of the shares of Al Yah Satellite Communications Company “Yahsat” for trading will take place in the main market as of next Wednesday under the symbol “YAHSAT”.
This is the second listing of its kind in the Abu Dhabi market during the year 2021, when in June of the same year, the Alpha Abu Dhabi Holding Company was listed. The market clarified in a circular posted on the website that trading in the company’s shares outside the trading halls will be suspended as of the date of its listing in the market, and that any trading on its shares outside the market as of that date is considered void, and the transfer and transfer of ownership of the shares resulting from this will not take place. Processes.
And Yahsat set the final offer price of the shares at the end of last week at 2.75 dirhams per share. The capital of “Yahsat” is 2439.77 million dirhams, with a nominal value of 1 dirhams per share.