With the innovative WibitTAG-system, the colorful play modules forming any letter, number or symbol can be put on the water to create individual messages. Due to the innovative modularity of Wibit Sports products, any location can be given its own identity.

In King Abdullah Economic City, the letters ‘Saudi-Arabia’ represent not only a floating playground but also an eye-catching way of communication. 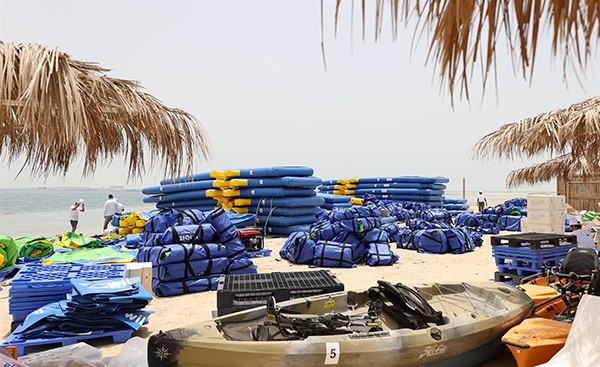 Within just four days the 17-ton water park, which consists of more than 200 inflatable modules, was transported from the company’s headquarter in Bocholt, Germany, to Saudi Arabia.

The six-person Wibit-installation-team installed and set up the park in record time. The operator Blue Limits, a local Saudi company, hosted its opening in August.

This project marks another milestone for the German-based company, which is celebrating its 25th anniversary this year having installed SportsParks in 100 countries around the globe. On a size of 195 meters x 32 meters, locals and tourists, children and adults alike can experience water fun in a new exciting way.

Asking a small favour
We hope that you value the news that we publish so while you’re here can we ask for your support?

The news we publish at www.ausleisure.com.au is independent, credible (we hope) and free for you to access, with no pay walls and no annoying pop-up ads.

However, as an independent publisher, can we ask for you to support us by subscribing to the printed Australasian Leisure Management magazine – if you don’t already do so.