Validity of arbitration agreements in the UAE – what does the POA say? 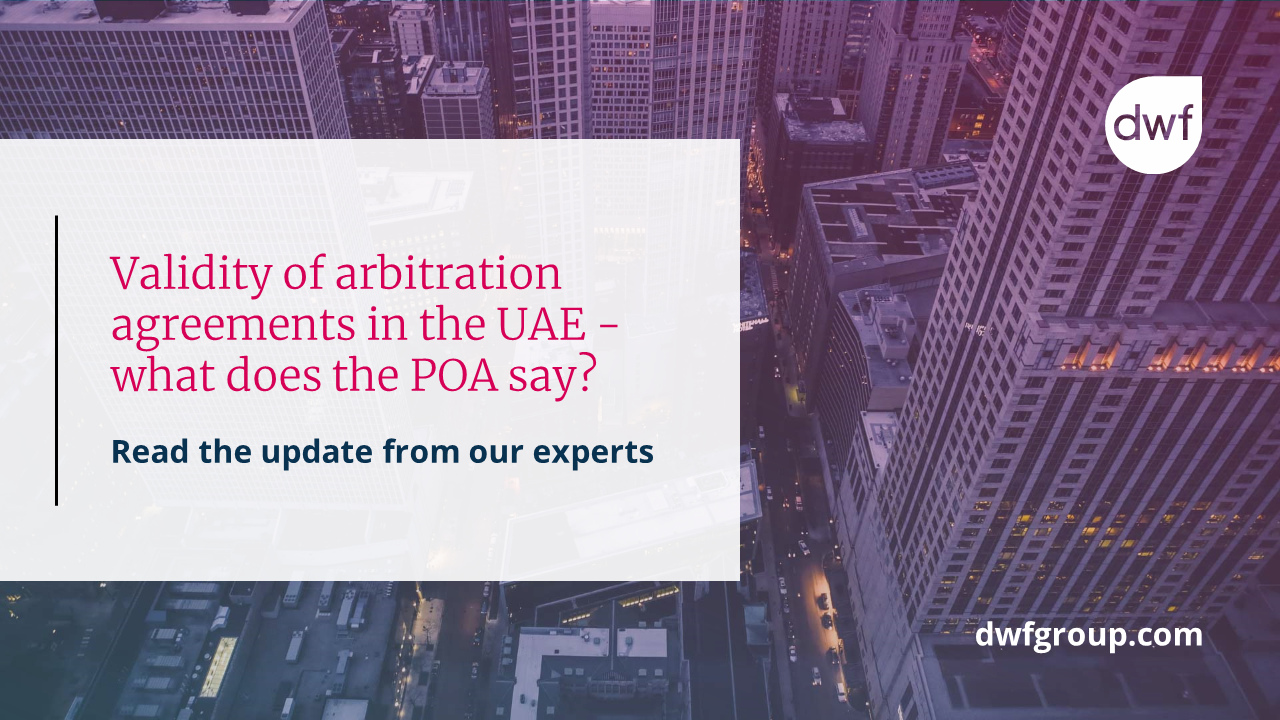 In a recent judgement (No.922-2020), (1) the Abu Dhabi Court of Cassation (the most senior judicial authority in the Emirate of Abu Dhabi) ruled that a representative acting under a power of attorney (“POA“) is only authorised to enter into an arbitration agreement provided their POA allows them to do so in clear and unequivocal terms.

In May 2018, the subcontractor’s representative received a separate POA (“Second POA“), which granted the right to bind the subcontractor in respect of Article 58(2) of the UAE Civil Procedures Law.

The subcontractor made a final appeal to the Court of Cassation.

The Court of Cassation Judgement

The Court of Cassation reversed the earlier decisions. At this stage, it is important to highlight the following provisions of UAE law (as unofficially translated):

ii. Article 217(1) Federal Law No 5/1985 Civil Transactions Law of the UAE: “If consent is given to a suspended transaction, it shall become effective retroactively to the time it was made, and the subsequent consent shall have the same effect as a prior agency.”

iii. Article 930 Federal Law No 5/1985 Civil Transaction Law of the UAE: “Subsequent permission for a dealing shall be regarded as a prior grant of agency.“

In respect of the representative’s authority generally, the Court of Cassation clarified that:

“The authority of the attorney may be explicit, implicit, or apparent. Authorisation is explicit if stated orally or in writing and implicit if inferable from the state of affairs, from what has been said or written, or from the ordinary course of dealing. Acts of an attorney which fall outside the scope of the power are null and such nullity is relative in favour of the principal whose approval is necessary for such acts to be valid. Determinations on such matters are within the discretion of the trial court whose reasoning must be sound and demonstrative of the operative part of its decision.“

Based on this, the Court of Cassation concluded that, since the Second POA did not ratify the acts under the First POA, the initial entry into the arbitration agreements under the subcontracts was carried out outside the scope of the representative’s authority. Therefore, these acts were void at the time they were made.

The Court of Cassation also mentioned that “the [contractor] deliberated extensively on the merits” in the expert procedure before the courts and, therefore, “waived its right to invoke the arbitration clause.”

While all of the above grounds appear sufficient to reach the Court of Cassation’s ultimate decision, the judgement expressly states:

“Indeed, the arbitration agreement is an exceptional arrangement whereby its parties opt for arbitration rather than litigation before the ordinary courts of law. This exception may not be interpreted broadly or extracted through analogy and must be construed within the narrowest limits. Furthermore, the parties’ intent must be clear and explicit and free from ambiguity and doubt.”

Based on this, the Court of Cassation ordered the action to be remanded back to the Court of First Instance for the consideration of the merits of the dispute.

This article is a third in a recent series of the Court of Cassation decisions in Dubai and Abu Dhabi, see our first update here and our second update here. It is somewhat worrying that the tide appears to be turning against upholding arbitration agreements, despite prior sentiment amongst the UAE Courts.

The Court of Cassation’s reiteration of the “exceptional arrangement” of arbitration is also likely to concern parties who are relying on the terms of the New York Convention that an “agreement in writing” is sufficient.

Two things are clear: i) the provision of the Federal law No 6/2018 on Arbitration that an arbitration agreement is valid only if entered into “by a representative with specific authority to arbitrate” are still an issue of concern; and ii) the UAE Courts will not shy away from accepting jurisdiction unless parties comply with all necessary formalities of UAE law, which appear to be ‘evolving’, in order to enter into a valid arbitration agreement.

Any parties seeking to resolve their disputes in arbitration should be aware of the intricacies of entering into a valid and binding arbitration agreement while conducting business (or dealing with parties based) in the UAE.