Abdulla bin Touq Al Marri, Minister of Economy, represented the UAE in the 108th meeting of the Arab League’s Economic and Social Council, which was held today at the HQ of the Arab League Secretariat-General in Cairo.

During the meeting, Al Marri highlighted the UAE’s keenness, upon the directives of its leadership, to achieving the development goals of Arab countries in line with the Council’s recommendations.

He called for greater efforts to increase intra-Arab trade, underlining the UAE’s support for all relevant regional efforts, made within the Greater Arab Free Trade Area (GAFTA) and the Arab Customs Union.

Al Marri also bid the UAE’s bid to host the 28th session of the Conference of the Parties (COP 28) to the United Nations Framework Convention on Climate Change (UNFCCC) in Abu Dhabi in 2023, as well as the country’s efforts to address climate change and protect the environment, most notably its achievements in the renewable energy sector and the circular economy and its endeavours to encourage regional and international cooperation in this field. 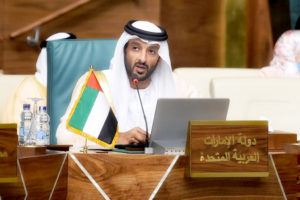