A trilateral agreement focusing on economic cooperation between three major countries in the region has sent reassuring messages to millions of people in the UAE, Jordan, and Egypt, as it touches on some of the most pressing issues at a critical period of time.

It is no secret that the whole world is bracing for food crises amid the Russian war in Ukraine and the growing fears of yet another economic recession. This economic anxiety has been just as high in the Middle East, a region where poverty, unemployment, and climate change have all been significant challenges, even before the COVID19 pandemic. 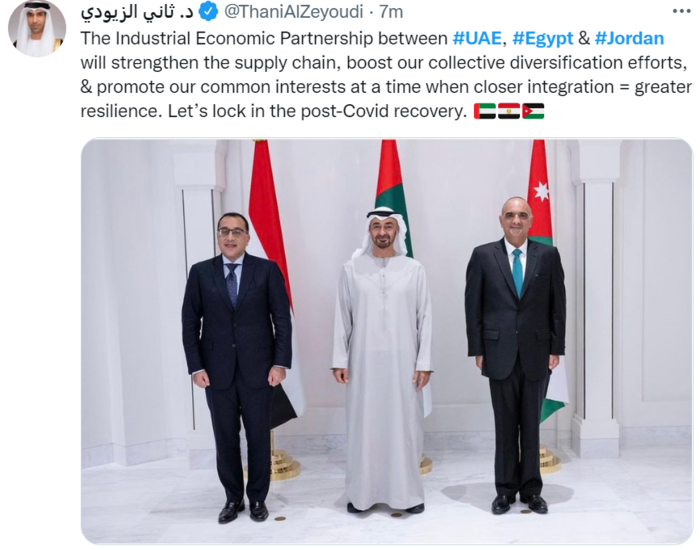 In an effort to alleviate the consequences of these crises, the UAE has joined Jordan and Egypt to examine a comprehensive economic agreement that helps each country overcome the set of obstacles it has been facing.

The industrial partnership agreement was announced on Friday by officials from all three countries, aiming to utilize a $10 billion investment fund set by Abu Dhabi Developmental Holding Company (ADQ) to establish a number of projects that can boost production in five main sectors; including petrochemicals; metals, minerals and downstream products; textiles; pharmaceuticals and agriculture, food and fertilizers.

Additionally, new projects will be taking advantage of the region’s major potential for renewable energy sources, which can help in setting the founding basis for sustainable and green industries.

The strategic partnership will pave the way for several industrial projects in the MENA region, which will help increase economic production and export activities in the three countries.

For the UAE, the richest partner of all, the new strategy can help the oil-rich country further diversify its economy, strengthen its local industrial sector, and utilize young talents in both Jordan and Egypt to double its gross domestic product GDP by 2031.

For Jordan and Egypt, thousands of young talents are expected to be hired by the upcoming projects in collaboration with the UAE, so they provide a fresh perspective on the new emerging business opportunities, which can all eventually lower unemployment rates in both countries and support their economies as they recover the devastating consequences of the pandemic.

The three countries will also achieve a higher level of food security, as they will be making effective use of water, land, and human resources in Egypt and Jordan to boost agricultural production and support the UAE’s successful food manufacturing sector.