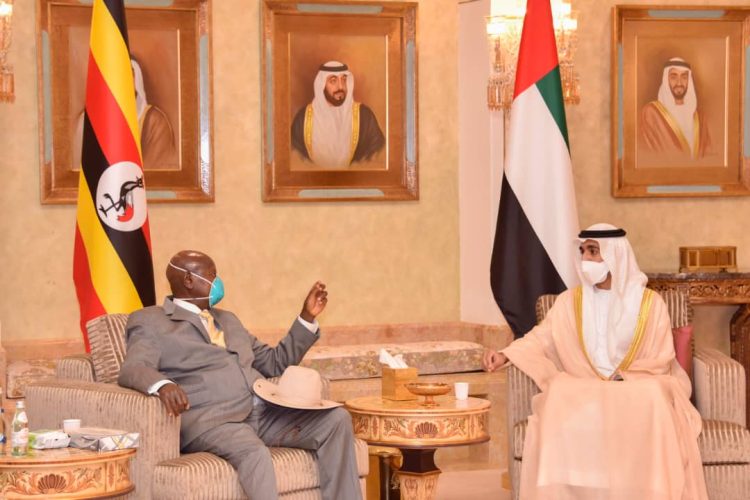 The crown Prince of the Emirate of Abu Dhabi and Deputy Supreme Commander of the United Arab Emirates Forces and ruler of Abu Dhabi Sheikh Mohamed bin Zayed bin Sultan Al Nahyan, will visit Uganda in 2022.

“The Crown Prince said he would be visiting Uganda in January 2022,” said Uganda’s State House.

The meeting was attended by Ministers, Jeje Odong of Foreign Affairs and Matia Kasaija(Finance).

The Crown Prince welcomed Museveni to Abu Dhabi, UAE and noted that the visit was of great importance and a rare opportunity for him to benefit from his(Museveni) experience, knowledge of security and country building.

“Now that you are here, I am going to benefit from your leadership experience and knowledge especially on security issues,” Sheikh Mohamed bin Zayed bin Sultan Al Nahyan said.

The Abu Dhabi ruler commended Museveni for his contribution to peace building in the region and pledged to work with him in this effort.

“My government is willing to work together with Uganda for a peaceful region,” he said.

On the side of investment, the Crown Prince of Abu Dhabi directed his Minister of Foreign Affairs and International cooperation, Sheikh Abdullah bin Zayed who was in attendance to lead a delegation of high profile business people to Uganda for investment opportunities.

On his part, President Yoweri Kaguta Museveni applauded his counterpart for the warm reception for him and his delegation.

“I am very happy to meet you, and to visit UAE and Abu Dhabi,” Museveni said.

President Museveni briefed the Crown Prince on the four major investment sectors that the UAE can interest themselves in including production of steel, fertilizers, energy and agro-processing.

The president said that Uganda has got good iron ore but still use the reconciled steel that is not good for strong steel.

“When we try to get strong steel, it comes from very far in China which is expensive because of the distance. We therefore want to develop a steel industry using our iron ore,” he said.

Museveni noted that with the peace, good infrastructure and market, Uganda is the best choice for any investor.

The meeting was also attended by the UAE Ambassador to Uganda Amb. Abdulla Alshamsi and the Ugandan Ambassador to UAE, Amb. Zaake Kibedi among others.