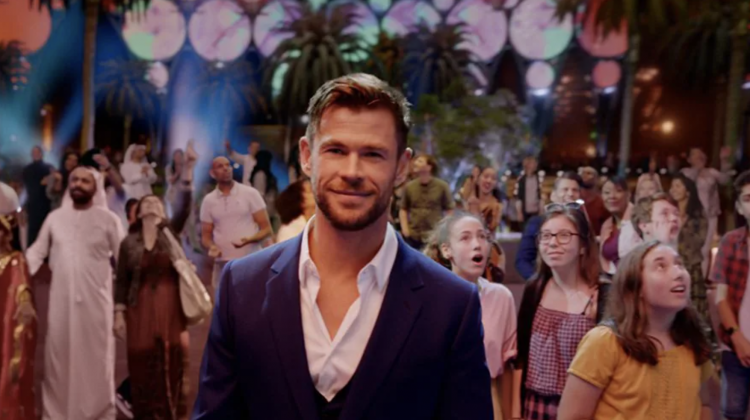 Homegrown heartthrob, Thor actor and Byron Bay enthusiast, Chris Hemsworth, is the face of a new campaign that some are suggesting are at odds with his work for Tourism Australia.

The 38-year-old has fronted a big-budget, CGI-heavy spot for Dubai’s Expo 2020 that was supposed to happen in October last year but was pushed back 12 months due to COVID restrictions and is set to go ahead next month running until March 2022.

Emirates – the official airline partner for the world fair in Dubai – has said the ad was made back in 2019 and subsequently shelved following the pandemic.

However, according to media reports, Hemsworth declined a recent opportunity to endorse Tourism Australia’s vaccination campaign after being approached by the federal government in June.

The ad for Expo 2020 Dubai and Emirates was directed by American director Robert Stromberg, who won Oscars for Avatar and Alice in Wonderland, and is set in the expo grounds, Burj Khalifa skyline and Jumeirah Beach Park.

It’s awash with plenty of colour and CGI trickery, and is set to the classic Pure Imagination from the 1971’s Willy Wonka & the Chocolate Factory.

Check it out below:

Commenting on the role, Hemsworth said: “In 2019, I partnered with Emirates and Expo 2020 Dubai to help bring awareness to what is a really important event for the world.

“We all have the power to shape a better future, and the last year-and-a-half has shown us that the possibilities are endless when we put our minds together.

“At Expo 2020 Dubai, the world will come together in the spirit of collaboration to provide real-life solutions that will benefit future generations. If you’re able to travel and you feel it’s safe, I sincerely hope you can make it.”

It also follows a concerted effort of late by Dubai Tourism to get travellers back to the country.

As B&T has been reporting, the destination’s tourism office has enlisted Hollywood A-listers Jessica Alba and Zac Efron to star in a series of six ads promoting the country and all with a movie-led theme.

Revisit the first two spots to drop so far in the campaign below:

Previous articleWatch: Potential buyers queue up to get townhouses in Dubai
Next articleDubai exchange expands commodities trading business in Africa with MOU