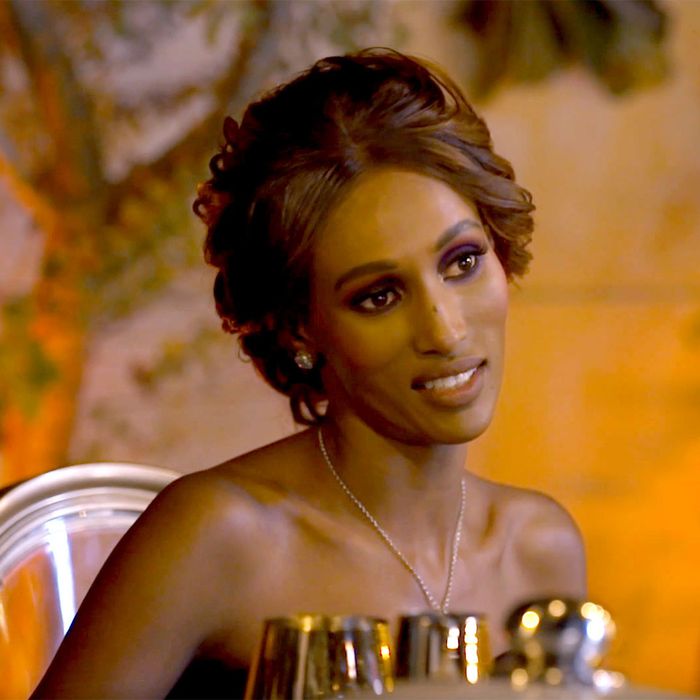 The Real Housewives of Dubai

Before I dive into the taglines and week’s review, I would like to extend my formal apologies for not remarking on Stanbury’s canine woes last week. I think I was still recovering from the trauma of watching the Beverly Hills housewives continue to eat from plates that Kyle’s dogs availed themselves to and was simply triggered by the horror of it all. I know people love their dogs, but when you’re at the point of casually exchanging bodily fluids, I start to black out. I just know the service staff in the Stanbury estate goes back home every evening snarking to their families over dinner about what new level of unhygienic puppy communions they witnessed that day. *shudders*

I also wanted to briefly acknowledge that I know that there has been a bit of unease about the amount of excess that is already being flaunted on this series, especially as American viewers are fighting inflation and gas prices that are higher than my phone bill; I’ve already expressed my own hesitation about where this journey will take us, and I am certainly going to hold the show accountable where I deem appropriate. That said, as a reminder, Housewives as an institution started as a look into the lives of gated community affluence and luxury. Its original claim to fame was aspirational content for the consumer; it’s only in more recent seasons that cast members began to be people who operated in relatively noteworthy circles but were using reality TV to re-establish their own financial solvency, which is, in part why the last several years of Bravo programming have devolved into True Crime investigations. The impact of people needing to keep up appearances to stay on the show, or visible otherwise, has caught up to several individuals, if you believe the various allegations.

With that out of the way, let’s get into the taglines.

Nina Ali: “If you think money can’t buy you happiness, you clearly haven’t been to Dubai.” Unremarkable, unoriginal, derivative, and yes, extremely elitist, but it’s also Housewives. Somewhere in the Regency Hotel, Luann de Lesseps is working on a mean diss track to debut at Brandy’s Piano Bar. 6/10

Chanel Ayan: “They don’t hate me because I’m beautiful; they hate me because they are basic.” The confidence in delivery punches harder than the actual words, which bumps the four I would give to this middle school jab to a 5/10.

Caroline Brooks: “The desert is ruthless, but nothing is more savage than me.” Is it on theme? Sure, but I’m docking points for lazy desert tropes and two year old references. This isn’t TikTok at the start of the pandemic, everything doesn’t need to be #savage. 7/10

Sara Al Madani: “A woman should be two things — who and what she wants.” This is a quote you see on someone’s IG Story, not a housewife tagline. There is no Canva template here, and she is not advertising her services — whatever those are — to us. Sara needed to go back to the drawing board on this. 0/10

Lesa Milan: “The only thing you can take from me are notes.” Cute, plucky, and to the point. The biggest knock against it is that it’s not thematic to Dubai, but considering the material of her peers, she stands head and shoulders above most of them. 8/10

Caroline Stanbury: “In the city of gold, nothing shines brighter than me.” Cutting, on theme, and appropriately delusional and narcissistic for a housewife. With deep reluctance, I must award the debut tagline trophy to the Lady of London. 9/10

Housewives fans, I would like to quickly take you on a journey back to 2009. Once upon a time, on a channel called BET, there was a show called College Hill that debuted in 2004; it was the first Black reality TV show and a hybrid between The Real World and A Different World. An iconic staple in Black popular culture at the time, the show ran for six seasons — the final one being in South Beach, featuring none other than pageant queen Lesa Milan. She would have an iconic fight in episode three with cast member Terri, who screamed at her, “you haven’t performed half the shit I’ve accomplished. Have you ever performed on 106? Are you on the TV? Are you the first African-American woman to be at the top of Miss Teen Florida?”

Fast forward a decade, and the iconic music video show 106 & Park is no longer; Terri is on Instagram trying to be a Tiktok comedian; and, a Miss Jamaica Universe competition and Usain Bolt relationship later, Lesa has settled into the lap of luxury with her now-husband and children, a thriving maternity line worn by everyone from Serena Williams to Beyoncé, and now a main cast role on Dubai where she’s quickly settling into the “loyal girlfriend who is willing to get messy at times” position. Her quick confessional asides on Nina and Caroline Brooks misaligned narratives — the former now claiming besties with Stanbury, who she once called “ghetto” and “ratchet,” the latter having claimed varying PanAfrican heritage throughout the Black Diaspora — and on top of that, she can cook!

This episode is bizarrely constructed around the American tradition of Thanksgiving, which the American expats insist on celebrating out of some fealty to tradition. As Ayan quips, “Thanksgiving is a very weird story. I’m from Africa, we’ve had many colonizers that were not supposed to be there, so I don’t want to get into it.” Putting the genocidal narrative aside, there is no reason why Thanksgiving would be celebrated in Dubai; it’s a story of American conquest. If you just want an excuse to cook a big meal, then just do that. Who doesn’t like to have a large gathering with food? It makes even less sense when you compare the two “Thanksgiving dinners” — Lesa goes all out with her delicious-sounding “Jamerican” menu of jerked turkey, crab, macaroni & cheese, curried prawns, and lamb chops. Nina’s menu … is turkey breast and French fries? And shish tawook, which is chicken on a skewer. Find me at Lesa’s house pretending to not celebrate Indigenous genocide.

We also are given a lot of insight into Ayan’s persona — namely that all her pomp and circumstance is a persona that she has built as an armor for deep-rooted pain that she escaped from; namely, abandonment and abuse by her father and subsequent triggers to feelings of exclusion, which I am sure she feels plenty of in the SWANA region as a darker-skinned African woman. This is probably something she can shield herself better from in a professional setting than in her more intimate social circles; it seems like this is something that Nina, being a friend, would be attuned to as others seemingly understand about her ostentatiousness, but we will just have to see play out over time. That said, Sara is fair in pointing out to Ayan that unaddressed trauma can lead you to bleed on people who didn’t cut you, and not everyone will want to put up with the stunts and antics, even if she is charming. I am not sure if life coaching is what Sara got her doctorate in, but at the very least, she gives solid guidance at this moment (I have no experience in hypnotherapy to endorse or disavow it, but I do know that people have used it successfully to quit habits like cigarettes and the like).

It is truly the cultural touches that make this show so far. Sara tries (and fails) to get her son to eat on the floor with his hands (as someone who is from a culture that also traditionally does this, I really think more people should try it, it’s not hard at all and in some ways a little comforting). Ayan brings a gift to Thanksgiving dinner … in the form of a live goat, which she explains is really valued in her culture, and Lesa quips that in Jamaica, her new present would end up over a stove; she later gives Sara onions, in true Shrek fashion. Stanbury offers her stiff upper lip and pursed British presence, which is par for the course — keep sugar baby Sergio in your prayers.

• Am I the only one who took forever to realize that the women held gold coins in the title card? I know my vision is rapidly deteriorating in my older years, but I finally bought myself a 4K TV during the pandemic, and I was still squinting.

• Caroline Stanbury insists on making allegations of unique Dubai living exceptions that aren’t exceptionally unique or inaccurate. Self-employed individuals struggle to work with lenders and underwriters in many countries, especially if you are in a competitive real estate market, and you will often be required to put a higher amount down cash just to be in conversation with the other prospective buyers. Also, divorce happens in Dubai! In fact, they have the highest divorce rates in the region! I don’t know why they keep doubling down on this Snapple Fact when it’s easily disprovable. It is not any more or less tedious than a divorce in the U.S. or Europe.

• Nina’s family doesn’t make sense. She’s trying to give this whole “started from the bottom journey,” but her husband started in Emirati banking and flew out every few weeks to see her in their courtship? And is now in crypto mining? (Also, how is that working out for them in their present state?) I am not going to say she was lying about working multiple jobs, but is she referring to, like, work-study jobs in college or grad school? A studio apartment doesn’t really indicate much; there are studio apartments in New York City worth in the millions, and I am sure that is the same in Dubai.

• Ayan-ism of the episode: “When people show you their blue color, you know they’re blue. Why try to see them in orange? They cannot be orange.”

Keep up with all the drama of your favorite shows!

By submitting your email, you agree to our Terms and Privacy Notice and to receive email correspondence from us.