Mumbai’s oldest &most favourite Indian snackis all set to step foot into the Indian street food market in Dubai with the launch of the world famous Tibb’s Frankie in the heart of Dubai at Wasl Hub (Block 4), Karama.

The legacy began in 1969 in Mumbai, India after late founder, Mr. Amarjit Singh Tibb came to India via Beirut from London. He delved the idea from the Lebanese stuffed pita bread & excitedly told his wife & co-founder lateMrs. SurinderKaurTibb about the idea. She was the one who perfected the recipe which today still lingers on the palate of millions of fans. The signature wholesome Indian snack which is 100% freshly prepared isan authentic Indian gravy rolled in a roti laced with the secret masala.

The word, “Frankie” was coined by the late founder, Mr. Amarjit Singh Tibb& is a registered trademark by Tibb’s Foods Private Limited. Today the chain has spread its wings across the globe.

Tibb’s Frankie offers an array of a juicy menu including the acclaimed bhuna mutton roll and the spicy mashed potato roll. In addition, the outlet will also serve their newest product, Tibb’s Curry Rice which is a combination of authentic Indian gravy infused with wholesome spices & servedalongside flavoursome rice.

“We are very excited to bring to Dubai. India’s favourite snack which has been there since 52 years now. Although  Dubai has several options for Indian street food lovers, Tibb’s Frankie is sure to make its way through not only in the palates of the consumers but will also surely touch their heart& build an emotional connect with them. Our secret masala is a treasure in itself, which gives us the confidence that people craving for authentic Indian flavourin Dubai don’t need to search anymore”, said ArvinderAhuja, Tibb’s Frankie franchisee, Dubai.

The restaurant,which will introduce the Kebab Frankie especially for the Arab community, was inaugurated by Ms Buthaina Al Marri. 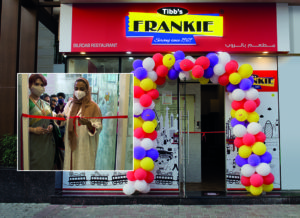