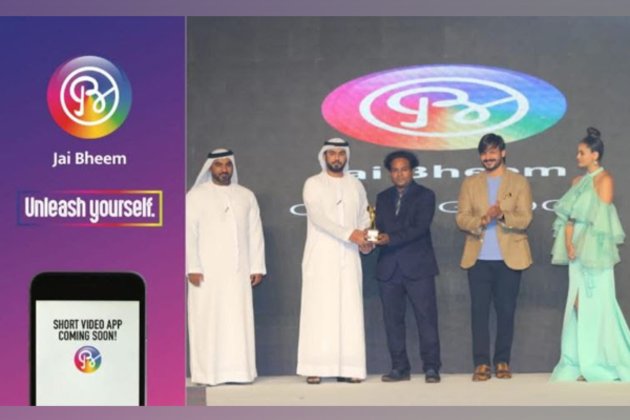 Mumbai (Maharashtra) [India], October 11 (ANI/NewsVoir): The Teaser of JAI BHEEM app was launched last week at the Mid-day International Icon Awards event that was held in Dubai by Girish Wankhede. The First Look of the Short-Video app fell ‘nothing short’ of creating a huge buzz in the international arena amidst film celebrities and even the international media present at the event.

“We are launching a Short Videos App that hones the skills of the youth in small towns that don’t get the opportunity to express their creativity. It will shape their careers by sharing the revenue with those whose videos go viral and the well performing short videos. It is an opportunity for youth offering them a career in entertainment as well as it makes them our ‘Revenue partners’,” announced Girish Wankhede, the Entertainment Industry Expert and the Chief Executive Officer of this app that is headed by a Board of Directors.

JAI BHEEM app aims to unleash the creativity of youth and hand-hold to lead them into international competition by offering the short video creators a space to connect to anybody across the globe to create their identity. Therefore its first look was launched in Dubai to make it a Global entity that is catering to the masses as well as classes as it has something for everybody with a combination of entertainment and entrepreneurship.

With the ban on several Chinese short video apps, there exists a huge space in apps for short videos format with some existing apps like Mauj, Josh, Takatak and Chingari, the short video app space is becoming hotter with youngsters from all strata of B Tier town and C tier towns now getting a chance to showcase their talent and get recognized and also be gratified.

The promoters of JAI BHEEM app aim to redefine the Es in the business. This app will not only talk about entertainment as right now but it would also specifically concentrate on monetization of Entertainment and thus promote entrepreneurship.

The beta version of JAI BHEEM app is expected to function in a week and the app creators are taking time to build up a better proposition and right mix of entertainment and entrepreneurship and by December end it will see a Global Launch.

Personifying Indianness and equality, this interactive app’s vision is to reach the maximum creative people across the worldwide space, felicitate them, make every youngster conscious and open up their entertaining creative minds, thereby opening a plethora of entrepreneurial avenues in their respective fields.

“We aim to channelize the creative energies of the new generation who may not be aware of any rewarding platform, thus creating a bridge and motivate them to unleash their talent in a better and constructive form. This App will add on aspirational value as well it will engage them in more creative pursuits,” revealed Girish Wankhede.

No wonder that JAI BHEEM app’s byline is – Unleash Yourself. It intends to create a bridge and motivate the youth in remotest corners of India to unleash their talent in a better and constructive form.

This story is provided by NewsVoir. ANI will not be responsible in any way for the content of this article. (ANI/NewsVoir)