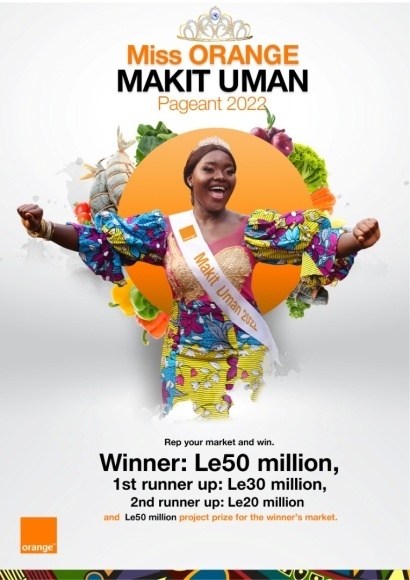 The company has set aside Le150 million for prizes, with the winner of the competition to bag Le50 million, 1st runner-up Le30million and the 2nd runner up Le20million.

It was disclosed during the launch that as a bonus prize, the market where the winner emerges from, will also get a Le50million development project to be implemented in their market to be sponsored by Orange Sierra Leone.

Slated to take place in Freetown some officials of the company have predicted that the competition will bring out the very best of talents in markets around the city.

“This pageant will tell a story of creativity; it will showcase talent. We want to show people that pageantry is not just about slim models doing cat-walks on the runway, but can be about a lot more,” one of them averred adding how it will be the first time such a social event has been organized.

It was disclosed that entry in to the Miss Orange Makit Woman 2022 is easy as interested persons can come to any of the open auditions held at their market, register their names and once the Head of the Market (Mammy Queen) confirms that they are members of that market, then they will be entered for the competition.

Also mentioned was that 12 contestants will be registered for the competition, one from each market.

Interestingly, shortly after the news break out markets like Funkia, Krootown Road and Congo markets have all lined up their contestants, with not only eyes on the prizes but also bragging rights.

Currently, the initiative has drummed up huge excitement from markets around the city.

Orange teams are doing open auditions at the biggest markets in the city such as Dovecut and Lumley markets.

The competition will run for one month and the competitors will be asked to display any talent they have, be it dancing, singing or even acting.

Unlike most pageants, Miss Orange Makit Woman will be open even to the oldest market woman but the minimum age for entry is 18 years.

“You can even be 65 and take part, it will be incredible to see what so many of these women have to display,” an organizer of the pageant said.

Markets form part of the rich history of Freetown, which is one of the oldest capitals in the sub-region. The competition will also play a key part in showcasing culture and hidden talents in stalls where people sell foodstuffs every day.