Stephen Donnelly and Robert Watt had a chauffeured car costing the taxpayer €1,000 arranged to ferry their delegation around Dubai Expo 2020 earlier this year.

Freedom of Information documents obtained by the Irish Mirror show a car and driver was booked for the Health Minister and his Secretary General’s trip by the Irish Embassy, in addition to the Embassy’s own transport.

There is also reference in the FoI documents to a “golf event” attended by the controversial €300,000 a year salaried Mr Watt while on his taxpayer-funded trip to Dubai.

The two men were slammed at the time for jetting out of the country to attend Expo at the end of January.

At the time, their department was engulfed in a number of controversies, such as the South Kerry CAMHS scandal, Covid was still rampant and the health service was at breaking point.

No other Secretary General had travelled out to Expo during three trips in the preceding months, including Enterprise Minister Leo Varadkar’s in November. 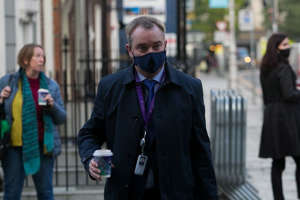 
Emails between the Irish ambassador, Aidan Cronin, embassy officials and Department of Health staff revealed the booking of an extra chauffeured vehicle outside the normal embassy fleet.

The embassy’s own eight-seat sedan car was also used for transport of the ministerial crew.

The Expo programme for the Minister and Secretary General had events scheduled for four days at the end of January and start of February, leaving a tab for the taxpayer of about €1,000 for chauffeur services.

Another email from the hotel the delegation was staying at, the five-star Voco Bonnington at Jumeirah Lakes Towers, shows the hotel organised airport transfers separately.

The documents obtained by the Irish Mirror also show the two top men in Health had two days off during their six-day trip.

Mr Watt had a meeting scheduled at a “golf event”, while Mr Donnelly declined the invitation.

Shane Lowry and Rory McIlroy were among the golfing stars that were playing in the Dubai Desert Classic, which was played the weekend Mr Watt and Mr Donnelly were in Dubai. Rory McIlroy narrowly missed out on winning the tournament.

Mr Donnelly and Mr Watt had official engagements on the Thursday and up until lunchtime on Friday and then they were off-diary until Monday morning.

This is despite Ambassador Cronin’s office arranging for the Health Minister to speak on a panel even as part of Expo on Sunday afternoon.

But this booking had to be cancelled.

Another email from one of Mr Donnelly’s senior aides said: “As mentioned, the Minister’s preference is not to have programmed events on the weekend.

“I see he is now listed as a participant in the Healthier World, Healthier People, World Majlis event on Sunday.”

A further email then added: “The Minster would prefer not to have commitments over the weekend, so on that basis I think we should turn down the offer of a speaking slot for the Expo event on 30 January.”

The official final itinerary seen by the Irish Mirror shows the Sunday event was removed from the schedule.

READ MORE: ‘No hidden agenda’ from St Vincent’s in refusing to sell site for hospital