Talented Nigerian music star, Small Doctor, was recently in Dubai when he encountered some ‘area boys’ looking to him for goodwill.

On the streets of Nigeria, ‘area boys’ are a common phenomenon. They are usually made up of boys and young men who lay claim to the road and extort passersby of their money before allowing them access.

Many times, these ‘area boys’ who are also known as touts are people who the society had been unfair to and they resorted to the streets to make a living.

This is a strategy: Reactions as Tega’s husband says she’s spiting him because he cheated

Taking to his verified Instagram page, Small Doctor who seemed surprised to meet ‘area boy’ in a developed place like Dubai, explained that the street is present everywhere.

The singer also did the needful by reaching for his purse to give the ‘area boys’ some cash.

See the video below:

Soon after Small Doctor’s post made the rounds on social media, a number of internet users reacted to it in different ways.

While some people were surprised to discover that there are also ‘area boys’ in Dubai, others were amused that men would leave Nigeria just to become street boys in another country.

Read some of their comments below:

“Imagine going to Dubai to do area boys .” 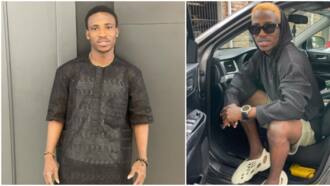 “I’ll rather be a area boy in Dubai than a graduate in Nigeria .”

“See why we getting deported.”

“U can’t take Nigeria out of Nigerians.”

“They are spoiling the name of Nigeria out there and we are laughing about it .”

Billionaire businessman, Femi Otedola’s daughter, Temi is not an actress for nothing. She recently recreated a video with singer, Small Doctor.

Small Doctor in a recent Instagram post revealed that he hung out with the fashionista, the pair posed beside boxing equipment as they made fists.

There is a trending video of actor Odunlade Adekola speaking Yoruba with a hilarious accent and it has been recreated by a lot of content creators.

Temi and Small Doctor decided to jump on the trend, they mimed the audio as they recreated their own version.