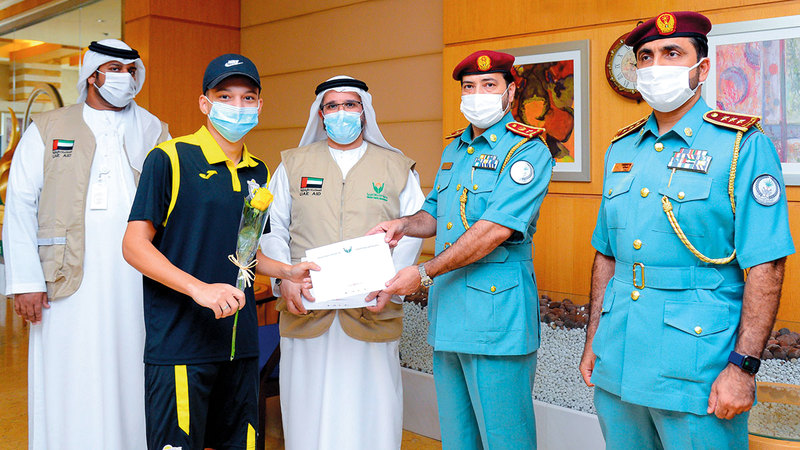 With the support of “Sharjah Charity” and “Red Crescent”

Providing travel tickets so that visitors can return to their home country.

The Sharjah Police General Command, represented by the Community Police Department, took the initiative, with the help of 12 European and South American visitors to the country, who were subjected to fraud and stranded, and obliged them to remain without food or shelter, in a humanitarian gesture that combined a humanitarian and social character.

This came during the receipt of a report to the Central Operations Room of Sharjah Police, stating that there was a gathering of a number of people in front of a hotel in the emirate. He brought them from their homeland on visit visas, after they were deluded of providing them with job opportunities in the emirate, and after defrauding them, he fled.

The Director of the Community Police Department of Sharjah Police, Lt. Col. Ahmed Muhammad Al Marri, said that “a team from the department has followed up the case since the receipt of the communication, and worked in cooperation and coordination with the strategic partners in charitable societies, which were represented by the Sharjah Charity Association and the Emirates Red Crescent Authority, by providing them with housing and meals. During their stay in the emirate, travel tickets were also provided to each of them, so that they could return to their homeland.

He added: “Sharjah Police is keen to enhance means of communication and continuous support for various segments of society, including its citizens and residents from various foreign communities, as we have been keen to follow all measures that guarantee their safety and their safe return to their homeland, which confirms the police’s societal role in enhancing security and safety for individuals society, in order to achieve its goals consistent with the strategy of the Ministry of Interior aimed at enhancing security and safety.”

A number of those who were subjected to this fraud process expressed their great happiness and thanks for the cooperation of the Sharjah Police with them, and their assistance in returning to their homeland, praising the great humanitarian role provided by the Sharjah Police to serve the various segments of society in order to enhance the quality of life, stressing that the UAE is always a pioneer in doing good to all. And provide aid to every needy on its land.

Visitors were subjected to “fraud” and were left without food or shelter.