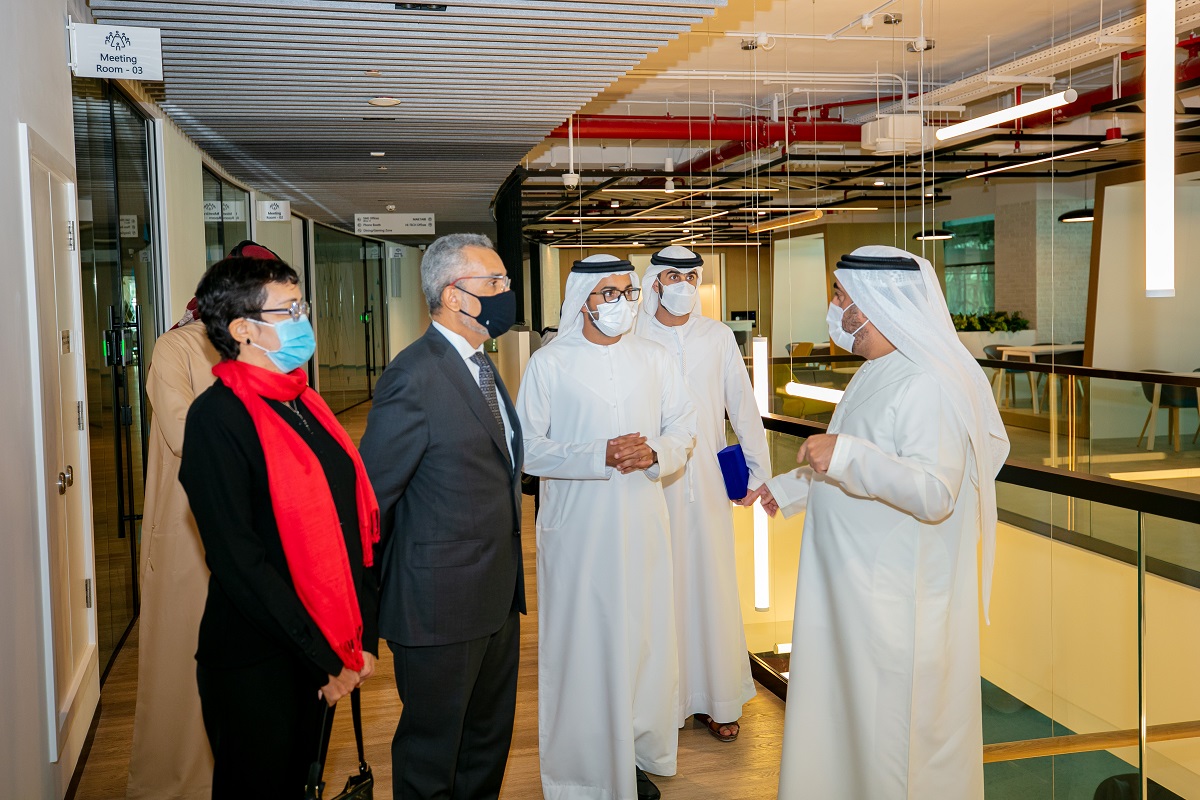 Sheikh Fahim Al Qasimi, Chairman of the Department of Government Relations (DGR) in Sharjah, has explored potential ways of strengthening cooperation between Sharjah and Brasilia in vital sectors including culture, sports and science, with HE Fernando Luís Lemos Igreja, Brazilian Ambassador to the UAE.

Both parties discussed the possibility of establishing Brazilian cultural centre in the emirate to expose the UAE’s residents and citizens to Brazil’s art, literature and culture and offering them a unique opportunity to learn Portuguese.

Following discussions on collaboration in sports, the delegations decided to organise a meeting between Sharjah Sports Club and the Morumbi Stadium, the second-largest stadium in Brazil.

After the meeting concluded, Sheikh Fahim accompanied the Brazilian Ambassador on a tour of the Sharjah Research Technology and Innovation Park (SRTIP) and House of Wisdom – Sharjah’s new cultural landmark.

During the tour, Hussain Al Mahmoudi, CEO of SRTIP, gave a brief on the free zone facility and its mission to provide an environment for creativity, innovation, and R&D. He noted that the park which has earned an enviable reputation as a leading free zone in the innovation and technology sector, was a haven providing premium investment incentives and services for both local and international investors that enable them to conquer global markets.

During his tour of House of Wisdom, the Brazilian Ambassador was briefed on the unique features of this futuristic library and social hub.

Sheikh Fahim stressed the historical partnership between Sharjah and Brazilian cities in several fields, including knowledge, culture, innovation, and economy. Reaffirming the close, deep-rooted ties between Sharjah and Brasilia, the DGR Chairman said the discussions with Brazil’s Ambassador reflected both sides’ keenness to further economic and cultural cooperation.

Sheikh Fahim commented: “Brazil is home to an ancient civilisation and an amazing diversity of cultures. As a developing mixed economy rooted in industry and agriculture, it offers Sharjah many opportunities for mutual cooperation.”

For his part, HE Fernando Luís Lemos Igreja commended Sharjah’s leading advances in technology, science, culture and infrastructure, attested by developments such as SRTIP. Praising the House of Wisdom, he lauded Sharjah’s role in pioneering the cultural movement in the region.

The Ambassador hailed the longstanding bilateral relationship between the two nations in several sectors, emphasising Brazil’s keenness to boost economic and cultural ties with Sharjah.

Previous articleDubai Crude for April to be priced at $0.10/bbl below Oman
Next articleTraveling fully vaccinated? Seychelles will waive your quarantine requirement