The price moves follow the Oct. 4 meeting of OPEC and its allies, during which the group agreed to increase crude production by 400,000 b/d in November, sticking to their plans to keep easing historic output cuts.
For Asia-bound crude, November differentials versus an Oman/Dubai basis for Super Light and Light grades were cut by 10 cents/b, Extra Light by 20 cents/b and Medium and Heavy grades by 40 cents/b versus October levels, Aramco said in an Oct. 5 pricing letter.

For crude destined for the Mediterranean, November differentials versus ICE Brent were lowered for Medium and Heavy by 60 cents/b and by 30 cents/b for Extra Light and 50 cents/b for Light.

Aramco also cut prices for crude bound to Northwest Europe and the US after keeping them unchanged in October. Extra Light to North West Europe was down $1/b. Light was lowered by 70 cents/b. Medium and Heavy were down 50 cents/b compared with October levels.

For US-bound crude, Saudi Light, Medium and Heavy were all lowered by 10 cents/b, with Extra Light to the US the only price to remain unchanged. 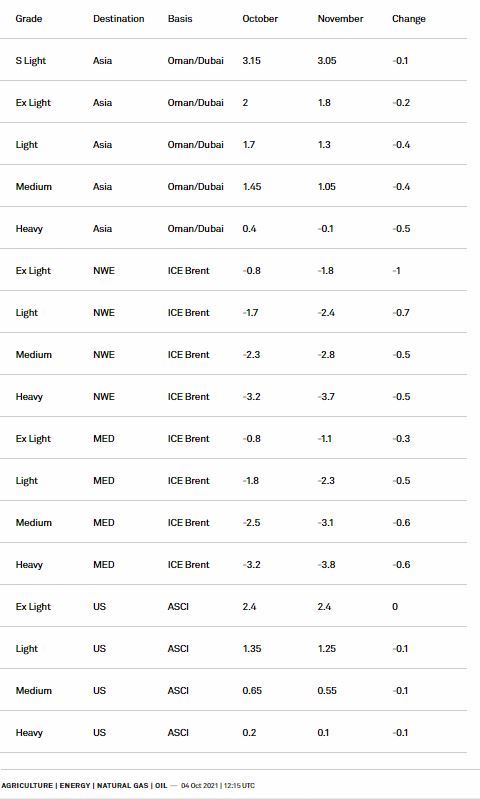