Saudi Aramco cut its October official selling prices for Asia and Mediterranean-bound crude and kept them unchanged for Northwest Europe and the US as OPEC+ continues to add more oil to the market.

The price moves come on the heels of the Sept. 1 meeting of OPEC and its allies, which agreed to hike their collective crude production by 400,000 b/d in October, sticking to their plans to keep easing back their historic output cuts.
With crude prices above $70/b, economic growth firm and rival US production growth still relatively subdued, OPEC+ ministers saw no reason to change course, quickly wrapping up their virtual meeting in under an hour.

For Asia-bound crude, October differentials versus an Oman/Dubai basis for Super Light and Light grades were cut by $1.30/b, Extra Light by $1.20/b and Medium and Heavy grades by $1/b versus September levels, Aramco said in a Sept. 5 pricing letter.

Market participants expected a cut of OSPs to Asia by at least 30-50 cents/b on the month, with deeper cuts of around 50 cents/b -$1/b likely for Medium and Heavy grades. Meanwhile, the Brent/Dubai EFS structure and Dubai forward structure, which are deemed as barometers for OSPs to Asia prices, dropped by 32 cents/b and 86 cents/b, respectively, in the last five trading days of August compared with the end of July.

The Asia cuts compared with a rise in September, when Asia-bound crude OSPs were increased by 20-60 cents/b.

For crude destined for the Mediterranean, October differentials versus ICE Brent were lowered for Extra Light, Light, Medium and Heavy by 10 cents/b. The cuts were not as steep as in September, when OSPs for Mediterranean-bound crude were cut by 60-90 cents/b.

For US-bound crude, Saudi Light, Medium and Heavy were all raised 10 cents/b on the month in September, with Extra Light seeing a 20 cents/b increase.

The Middle East’s crude market share remains intact in most Asian countries this year compared with a year ago and the pre-pandemic period except South Korea, according to Platts Analytics. 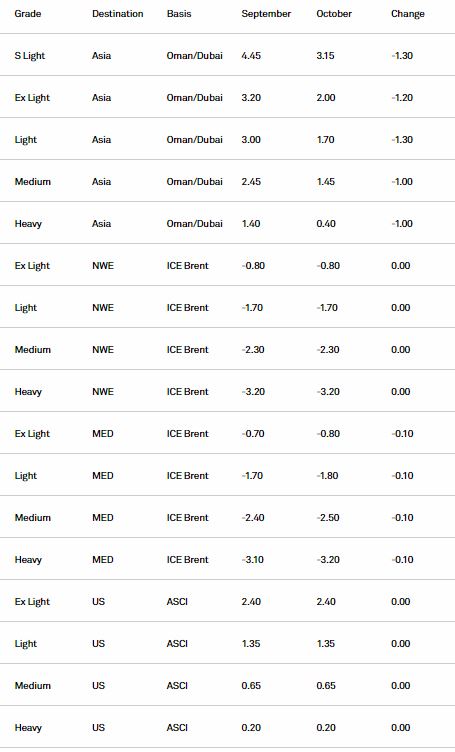