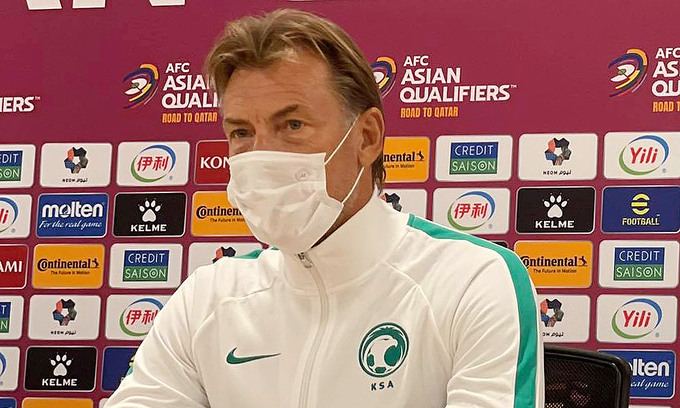 “We respect every opponent in this group. Vietnam has many good defensive players. I can imagine that the match against them will be difficult,” Renard said at a press conference at Mrsool Park football stadium.

“We will not be subjective. All the teams that have made it into this round are strong. However, instead of thinking about the opponent, we will focus on how our own team can perform better.”

In the second qualifying round, Vietnam had a clean sheet in the first six matches and topped Group G. But in the last two matches, the team conceded to Malaysia and the UAE. Coach Park Hang-seo’s team was able to continue in the tournament as one of the second placed teams in the group stage with 17 points.

Saudi Arabia has played in the World Cup five times, while this is the first time Vietnam has made it to the final round of qualifiers.

In the second qualifying round, Saudi Arabia topped Group D with an undefeated record, winning 20 points from eight matches. The last four matches were won conceding no goal while scoring 14.

When asked if this form would continue, Renard said: “We have to look at the fact that in this round the teams have better defenses. I want to send a message to the fans that we are very determined and focused. The team will give its best to continue the journey to the 2022 World Cup. I understand what the fans expect.”

The Frenchman, who started his coaching career in 1999, came to Vietnam five years later to manage Nam Dinh FC but left after a few months due to a dispute with the players. He later found success in Africa, winning the continental titles with Zambia in 2012 and Côte d’Ivoire in 2015.

A year later, he took Morocco to the World Cup for the first time in 20 years. Renard started his stint with Saudi Arabia in 2019. Under his management, the team has won eight, drawn three and only lost one game so far.

The clash between Vietnam and Saudi Arabia will take place at the King Saud University Stadium on Sept. 2 (1 a.m. Sept. 3 Hanoi time). It will be reported live on VnExpress International.