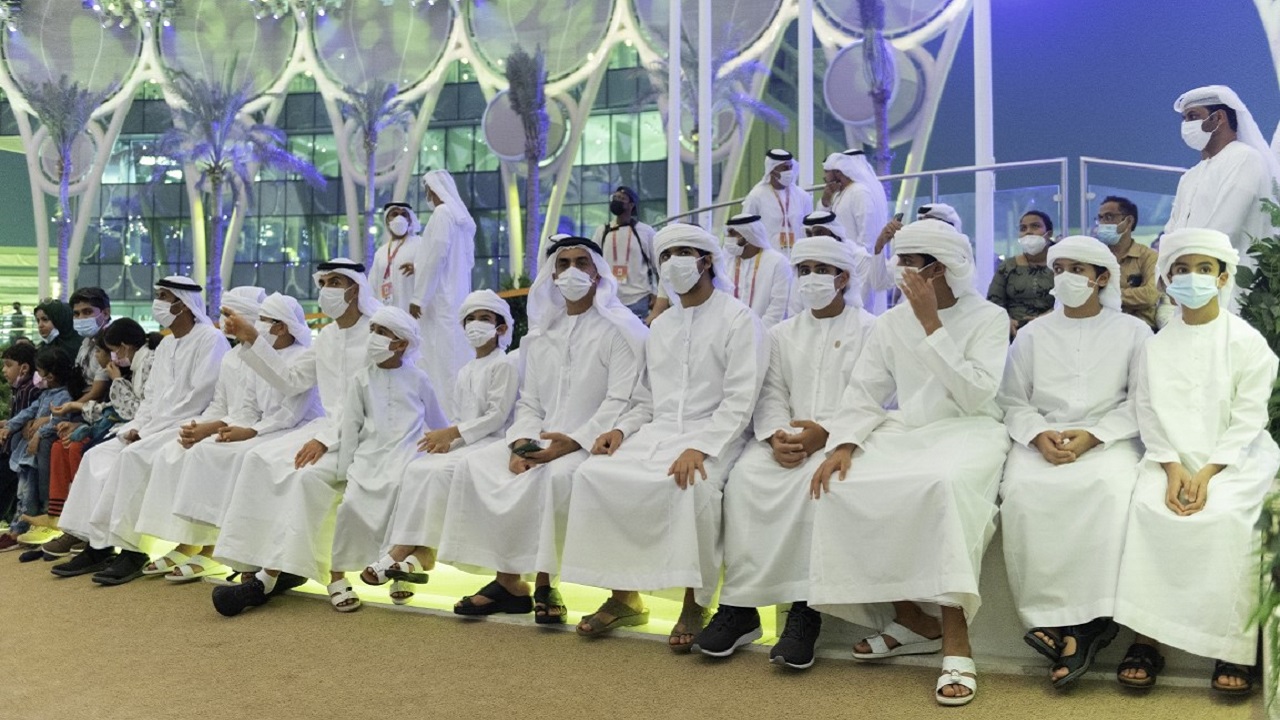 Their Highnesses were keen to visit a number of pavilions of the participating countries in the huge event held under the slogan “Connecting Minds and Creating the Future”, which includes the pavilions of 192 countries, in addition to the participation of the most important institutions, international organizations and bodies and the elites of innovators and creators from around the world.

Upon their arrival at the UAE pavilion, they were received by Noura bint Mohammed Al Kaabi, Minister of Culture and Youth, Commissioner-General of the UAE Pavilion, and Reem bint Ibrahim Al Hashemy, Minister of State for International Cooperation and Director General of the Expo 2020 Dubai Bureau, and they accompanied them inside the corridors of the pavilion.

Their Highnesses toured the pavilion that tells the story of the UAE, “the home of dreams and achievement”, and listened to an explanation about its exhibits and documentaries, which represent the story of the emergence of the UAE and the vision of the pioneering founding leaders in building a modern, advanced state that consolidates the ancestral past and authentic history.

Their Highnesses exchanged conversations with those in charge of the pavilion, which was designed in the shape of a falcon preparing to launch, and their Highnesses inspected the sections of the pavilion, including unique exhibits that stem from the culture of the authentic Emirati society and its established human values, and narrates the country’s march and provides its visitors with rich Emirati experiences in its contents, and displays the country’s messages in promoting work. humanitarian and consolidating the values ​​of peace, justice and respect for others, and inviting the world to communicate and human interdependence, as well as exhibits representing the values ​​of the people of the Emirates, who show generosity, coexistence and tolerance under the wise leadership, and their Highnesses’ keenness to thank the national cadres in charge of the pavilion.

Their Highnesses had stopped at Al Wasl Square, the beating heart of Expo 2020 Dubai, and attended some of the spectacular performances held there.

Their Highnesses were also briefed on the details of the Bahrain pavilion, its urban design, and the programs and exhibitions it offers that reflect the concept of density that Bahrain enjoys, and its role in creating promising opportunities in leading the mentality of trade and innovation, in addition to the accompanying cultural programs offered by the pavilion, which contributed to enriching Bahrain’s participation. at Expo 2020 Dubai.