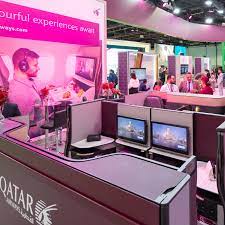 DOHA, Qatar, 2022-May-10 — /Travel PR News/ — Qatar Airways is participating at Arabian Travel Market (ATM) 2022 (Hall 1, ME1240), taking place from 9 to 12 May in Dubai and following the COVID-19 pandemic and ease of restrictions, the national carrier of the State of Qatar will showcase the “World’s Best Business Class Seat”, the multi award-winning Qsuite and a Virtual Reality experience of Hamad International Airport, recently voted the “Best Airport in the World.”

Qatar Airways is strongly positioned to continue to lead the global recovery of the aviation industry – the “World’s Best Airline” operates from the “World Best Airport” as voted by Skytrax, and has introduced new routes as part of a robust growing network, stronger partnerships agreements with Alaska Airlines, American Airlines and JetBlue in place, membership of the leading global oneworld alliance, a new loyalty programme currency with Avios, while also operating the world fully vaccinated flight and becoming the first global airline in the world to achieve a Five Star Covid-19 Airline Safety Rating from Skytrax.

In a sign of the airline’s resilience and determination to keep the world connected during its darkest days, Qatar Airways was number two globally for Revenue Passenger Kilometres (RPKs) during 2021 with a 6 per cent share of the market according to IATA figures. Qatar Airways also grew significantly by 26 per cent compared to 2020 with the industry growing by only 1 per cent, while in 2020, following the onset of the pandemic, the airline was also one of the largest carriers by RPKs.

Throughout the pandemic Qatar Airways not only played a vital role in the world’s response to the COVID-19 pandemic but was the only global airline flying consistently since the onset of the pandemic, now operating to more destinations with more weekly flights than any other airline in the region. The airline also significantly grew its network to 145 destinations, especially in the US where it now operates to 12 cities with almost 100 flights per week, including to recently added San Francisco and Seattle. Qatar Airways also heavily focused on expansion into Africa with the addition of new routes to Abuja, Abidjan, Accra, Harare, Kano, Lusaka and Port Harcourt, firmly cementing the importance of Africa to the airline.

The airline’s hub, Hamad International Airport (HIA), was also recently awarded the ‘Best Airport in the World 2021’, ranking at number one in the Skytrax World Airport Awards 2021. Offering an unsurpassed customer experience at the airport, passengers can also avail of incredible shopping with Qatar Duty Free offering numerous retails shops and beverage outlets, including many of the world’s finest stores and Middle East exclusives, or simply relax in the airside Oryx Airport Hotel. Additionally, the Al Mourjan Business Class Lounge, voted “World’s Best Business Class Lounge” is a haven for our premium travellers in Business Class while the world renowned Al Safwa First Class Lounge features many original pieces and artwork, courtesy of Qatar Museums.

Qatar Airways loyalty programme, Privilege Club, recently introduced Avios as its reward currency for its members, providing even greater opportunities to accumulate rewards and leverage exciting new innovations in managing and spending. In addition, members will retain their well-earned rewards balance and will be able to continue enjoying the redemption opportunities they currently have. Avios is the global loyalty currency used by British Airways Executive Club, AerClub, Iberia Plus and Vueling Club, and can be collected across a wide mix of consumer sectors, including aviation, travel, leisure, shopping and financial services.

The multi-awarding winning Qsuite was introduced in 2017 and still  remains the “World’s Best Business Class Seat” features the industry’s first-ever double bed available in Business Class, with privacy panels that stow away, allowing passengers in adjoining seats to create their own private room. Adjustable panels and movable TV monitors allow colleagues, friends or families travelling together to transform their space into a private suite, allowing them to work, dine and socialise together in a safe environment. These new features provide the ultimate customisable travel experience that enable passengers to create an environment that suits their own unique needs.

As FIFA’s Official Airline Partner since 2017, Qatar Airways has sponsored mega events including the 2019 and 2020 editions of the FIFA Club World Cup™, and the FIFA Arab Cup™, all of which were hosted in Qatar. The airline is also eagerly anticipating the upcoming FIFA World Cup Qatar 2022™ – the first in the Middle East – and offering a seamless journey from more than 140 destinations across the globe to fans attending this world-class event.

In its goal to bring communities together through sport, the World’s Best Airline has an extensive global sports partnership portfolio that includes football-governing bodies such as FIFA, CONCACAF and CONMEBOL. The airline also sponsors some of the world’s biggest football clubs including Al Sadd SC, Boca Juniors, FC Bayern München, K.A.S. Eupen and Paris Saint-Germain.

Qatar Airways also became the first global airline in the world to achieve the prestigious 5-Star COVID-19 Airline Safety Rating by Skytrax. This follows the success of Hamad International Airport as the first airport in the Middle East and Asia to be awarded a Skytrax 5-Star COVID-19 Airport Safety Rating. These awards provide assurance to passengers across the world that the airline’s health and safety measures are subject to the highest possible standards of professional, independent scrutiny and assessment.