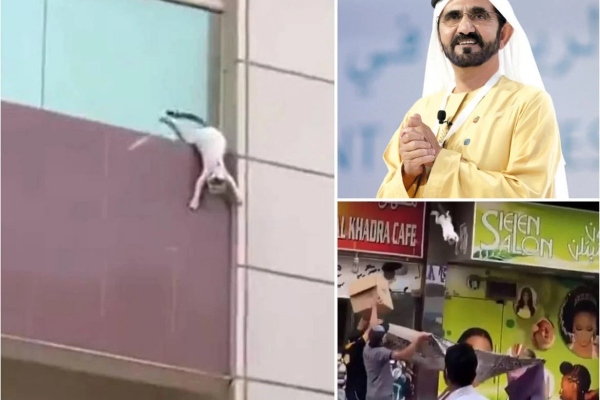 There are things that only happen in Dubai, but only some of them make the whole world happy…

Four people saved a cat, and for their actions and kindness, they were generously rewarded by the official ruler of this emirate. Sounds like fiction, but it really isn’t. Last week, videos and photos conquered the internet, praising four men who rescued a cat stuck on a balcony in a very busy street in Deira, Dubai.

The cat, which was pregnant at the time, reached the balcony of the second floor and could barely hold on. Naseer Muhammad, a bus driver from India, Atif Mehmood, a salesman from Pakistan, Rashid Mohammed, the owner of a grocery store, and Ashraf Bleinza, a Moroccan security worker, gathered to help. Three men found an old blanket, while one of them made a video.

Proud and happy to see such acts of kindness in our beautiful city.
Whoever identifies these unsung heroes, please help us thank them. pic.twitter.com/SvSBmM7Oxe

The video was published on social networks and soon after it went viral, so it was published by numerous media stations on their channels. The influence of the video even reached Sheikh Mohammed bin Rashid, the vice president and ruler of Dubai. He shared the video on Twitter and asked his followers to help him reach the actors from the video, which they did. Government officials visited the four men and handed them envelopes containing 50,000 Dhs, or about $ 13,700.

The royal family of this emirate is known for their love for animals, which they have shown many times. We recently had the opportunity to see the crowned prince, Sheikh Hamdan Bin Mohammed Bin Rashid Al Maktoum, who shared a photo of a pigeon nestled on the hood of his Mercedes-AMG G63 model on his Instagram account. The prince then fenced his car with red and white tape, so that the bird could nest its eggs in peace.

Of course, the Internet would not be the Internet without a few mimes and jokes, but you have to agree with us on one thing: after stories like this, we feel warmth around the heart.

Previous articleWebinar outlines why Dubai is ‘gateway to the world’
Next articleCOTE D’IVOIRE: AFOLU (Agriculture, Forestry and Other Land Use) and ENERGY Policy Briefs VALIDATION WORKSHOP