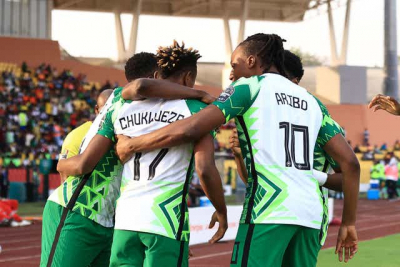 Nigeria will chase a second win in Group A of the 2023 Africa Cup of Nations qualifiers when they face ‘hosts’ Sao Tome & Principe at Stade Adrar in Agadir, Morocco, on the afternoon of Monday 13 June.

Nigeria opened their campaign with a somewhat nervy 2-1 win over Sierra Leone last Thursday evening in Abuja, coming from a goal down to claim victory via strikes from Alex Iwobi and Victor Osimhen.

It was not the most convincing performance from the Super Eagles, but they got the job done and put three points on the board – an important marker in a year in which they stumbled out of the Afcon finals at the last 16 stage and failed to qualify for the World Cup.

Coach Jose Peseiro argued that Nigeria “created a lot of scoring chances, we could have won with a bigger margin, but the team needs more time and we must work”.

The Portuguese also defended his decision to pick Iwobi and Joe Aribo in central midfield – an option he corrected in the game by bringing on Peter Etebo at the start of the second half.

“I can play any player, I make the final decision. If I ask you, to give me your XI, it will be different from others,” Peseiro explained. “I believe in my players, it’s my responsibility to select the players according to our plans.”

Sao Tome & Principe, meanwhile, got their Group A campaign underway with a 1-5 loss at the hands of Guinea-Bissau at the same Stade Adrar last Thursday. The minnows claimed an early lead through Eba Viegas, but were ultimately out-gunned by the Djurtus over 90 minutes.

Seleção dos Falcões e Papagaios (The Falcons and True Parrots Team) have never qualified for the Afcon finals before. Their attempt to reach the 2021 finals saw them finish bottom of a group which included Ghana, Sudan and South Africa.

In head-to-head terms, this will be the first meeting of Sao Tome & Principe and Nigeria.

Lesotho referee Osiase Koto will take charge of the match in Agadir. The other Matchday 2 fixture in the group sees Sierra Leone host Guinea-Bissau in Conakry, Guinea, later on Monday.