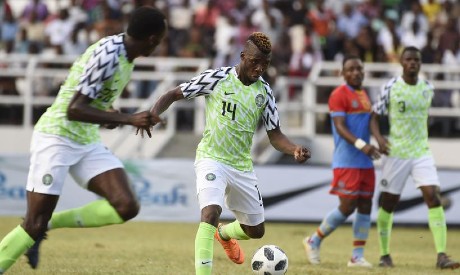 A double from Kelechi Iheanacho gave Nigeria a winning start to their World Cup qualifying campaign as they beat Liberia 2-0 on Friday.

The Leicester City striker opened the scoring midway through the first half before ensuring the win with a 44th-minute strike.

Nigeria, who are seeking to reach the World Cup for a fourth consecutive time, top Group C with three points, with Central Africa and Cape Verde joint second on one point after playing out a 1-1 draw on Wednesday.

In Group B, Zambia, who are eyeing their maiden World Cup appearance, kicked off their qualifying campaign with a 2-1 win away to Mauritania.

Enock Mwepu fired Zambia in front after 10 minutes and Prince Mumba doubled their advantage in the 57th minute. Mamadou Niass narrowed the gap nine minutes past the hour mark but Mauritania failed to find an equaliser.

In Group D, the Ivory Coast were held to a disappointing 0-0 draw away to Mozambique while South Africa’s game against Zimbabwe in Group G also ended goalless.

Previous articleGhana has not sold $150bn lithium deposit to Australia’s Ironridge Resource – Government
Next articleJournal de d’Afrique – HYDROCARBONS IN CÔTE D’IVOIRE: DISCOVERY OF OIL AND GAS OFF THE COAST