Ambassador Katonitabua has served with distinction both as a seasoned Fijian diplomat and as a career civil servant during his 25 years in service.

ermanent Secretary at the Office of the Prime Minister Mr Yogesh Jitendra Karan with His Excellency the President of the Republic of Fiji, Major-General (Ret’d) Jioji Konusi Konrote and Fiji’s Ambassador to the United Arab Emirates (UAE), Mr. Naipote Tako Katonitabua at the State House.

His Excellency the President of the Republic of Fiji, Major-General (Ret’d) Jioji Konusi Konrote today officiated at the commissioning of Fiji’s Ambassador to the United Arab Emirates (UAE), Mr. Naipote Tako Katonitabua.

In affirming his commitment to the new diplomatic role, Ambassador Katonitabua thanked the Fijian Government for having confidence and faith in him to represent Fiji through the diplomatic appointment as the Head of Fiji’s Mission in Abu Dhabi, the United Arab Emirates.

He stated that Fiji’s Mission in UAE under his leadership will aspire to take Fiji and UAE bilateral cooperation to greater heights, through maximising opportunities for enhanced engagements and advancing interests in mutual areas of cooperation between the two nations. 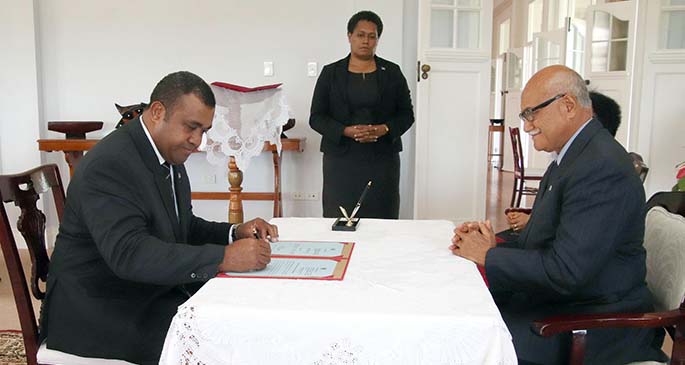 Ambassador Katonitabua said given the current global and regional challenges, the Fiji Mission will strategically realign plans and resources to acquire best means of maximising returns on investment for Fiji and the Pacific Region.

As part of the preparation for his new diplomatic role, Ambassador Katonitabua has held a series of meetings with senior officials from the Government and Non-Government agencies to seek stronger partnership and support that will be coordinated through Fiji’s Mission in UAE.

Ambassador Katonitabua has served with distinction both as a seasoned Fijian diplomat and as a career civil servant during his 25 years in service.

He had served in the Ministries of Economy, Foreign Affairs, Office of the Prime Minister, iTaukei Affairs before being the Director for the Center for Appropriate Development and Technology in Nadave in the past 22 months.