Maktoum bin Mohammed: Dubai will remain the first investment destination in the region 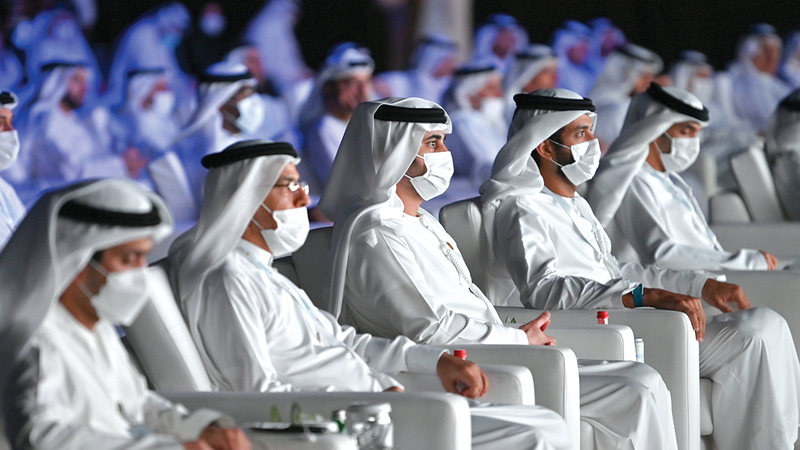 Yesterday, the Dubai Government Department of Finance announced the launch of a huge portfolio of projects available for partnership between the government of Dubai and private sector companies, with more than 30 vital projects in the infrastructure, public transport and urban development sectors, with a value of more than 25 billion dirhams.

His Highness Sheikh Maktoum bin Mohammed bin Rashid Al Maktoum, Deputy Ruler of Dubai, Deputy Prime Minister and Minister of Finance, stressed that the private sector constitutes a key element of the comprehensive development equation in Dubai, with its influential role in various vital sectors, and that Dubai has provided a model A global example in approving the foundations of constructive partnership between the public and private sectors, and the subsequent positive and clear repercussions that contributed to advancing sustainable development rates and accelerating the growth rates of many key sectors.

His Highness indicated – while attending part of the “Dubai International Conference on Partnership between the Public and Private Sectors”, which opened yesterday, under the patronage of His Highness Sheikh Hamdan bin Mohammed bin Rashid Al Maktoum, Crown Prince of Dubai, at the Dubai Exhibition Center at the “Expo 2020 Dubai”. And the first of its kind in the region – to Dubai’s relentless pursuit to take partnership with the private sector to higher levels, by providing opportunities, overcoming obstacles, and finding new frameworks and paths that allow increasing the space for private sector participation in the strong development process of the Emirate of Dubai.

His Highness said that the vision of His Highness Sheikh Mohammed bin Rashid Al Maktoum, Vice President and Prime Minister of the UAE and Ruler of Dubai, for the future of development and what it requires of concerted efforts, energies and capabilities, was “the solid foundation from which this exemplary integration of roles between the public and private sectors was launched, and the main reason Its strength and clear positive impact on Dubai’s development process, including major achievements in various fields.

His Highness added: “We place great hopes on this model partnership, in light of our leadership’s vision for the next 50 years, within a framework that guarantees the private sector and its institutions, of all sizes and specializations, sufficient space to multiply their roles within a supportive and stimulating environment for creativity. The government will continue to work hand in hand with the sector.” private partnership to create the future we aspire to, and to reach the highest levels of excellence to complete this unique model of partnership, which guarantees both parties unlimited prospects of success, and Dubai will always remain the first investment destination in the region with more opportunities, projects and initiatives based on a solid foundation of partnership between the public sectors and private.”

And with the announcement by the Department of Finance of the Government of Dubai, the launch of a huge portfolio of projects available for partnership between the government of Dubai and private sector companies, with a value of more than 25 billion dirhams, the value of existing and announced partnership projects between the public and private sectors in Dubai has become more than 65 billion dirhams.

The “Dubai International Conference on Partnership between the Public and Private Sectors” was attended by the Minister of Economy, Abdullah bin Touq Al-Marri, the Minister of State for Foreign Trade, Dr. Thani bin Ahmed Al-Zeyoudi, and a number of general managers and officials.

The Director General of the Department of Finance in the Government of Dubai, Abdul Rahman Saleh Al Saleh, said that the Dubai government has begun to draw accurate features for the next stage of innovation in financing vital government projects, in partnership between the public and private sectors, stressing that “this emerging vital field has become the next global innovative destination for governments. in its efforts to finance infrastructure and urban development projects.

He added that the government efforts led by the Department of Finance resulted in “laying solid foundations for building a comprehensive and integrated system in the field of partnership between the public and private sectors,” noting that “the Department will continue to develop and consolidate these foundations, in close cooperation with its partners from government agencies and private sector companies. “, which he said “has the capabilities, expertise and energies, and is looking forward to increasing the positive returns on its business from the opportunities that Dubai abounds in.”

For his part, the Secretary-General of the Executive Council of the Emirate of Dubai, Abdullah Al Basti, stressed that the historic success that Dubai is experiencing today would not have been achieved without the vision of a strategic leadership and well-thought-out development plans.

He added, “Dubai has historically been one of the most successful regional and international models in terms of partnership with the private sector, and it continues to achieve this.”

He said that the private sector’s choice of Dubai “is not a coincidence, as Dubai has worked to create the most attractive environment for attracting and growing business in the region and the world, as our flights reach markets that include more than five billion consumers, and we have infrastructure that tops global indicators, as for its ports.” Dubai owns a network of shipping lines that connect to various parts of the globe, giving it a qualitative logistical advantage, as it owns and operates 93 ports, and owns 127 companies, in 60 countries around the world, all of which contributed to the emirate having solid foundations that made it one of The world’s most capable cities to deal efficiently with the repercussions of the pandemic, and a global reference in reactive and proactive policies to achieve more successes.

He touched on a number of successful projects in the field of partnership between the public and private sectors, which support the journey of progress and continuous growth, as the Al Maktoum Bridge was established in the sixties as one of the historical partnership projects established in the development of infrastructure, and finally the Dubai Schools project was launched with an investment value of more than 580 Million dirhams, over the coming years, and between these two projects there are many strategic partnership projects that Dubai has worked on, and has brought about a qualitative leap in the development process in the Emirate.

In the international conference and the accompanying exhibition, the Department hosted: Dubai Electricity and Water Authority, Dubai Roads and Transport Authority, Dubai Municipality, and Dubai Health Authority. The four entities presented details of their projects for partnership with the private sector in front of a wide international, regional and local presence, which included more 600 decision makers and officials in ministries, government agencies, banks, and companies working in the fields of investment, contracting, consultancy and infrastructure development.

• “Mohammed bin Rashid’s vision formed the solid foundation for the integration of roles between the two sectors in Dubai’s development march, including its major achievements.”

• “Dubai has provided a global model for approving the foundations of a constructive partnership between the public and private sectors.”

• The “portfolio” includes more than 30 vital projects in the sectors of infrastructure, public transportation, and urban development.

• 65 billion dirhams worth of partnership projects between the public and private sectors in Dubai.

Previous articleAin Expo.. “Dubai Cares” shows the distinctive spirit of altruism of the people of the Emirates
Next articleExpo.. Dubai makes the dream come true