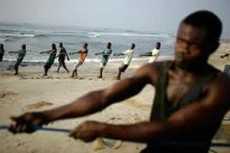 Ghana is losing between 14.4 to 23.7 million US dollars annually due to the issuance of low fishing licence fees and fines for foreign trawlers operating on its marine waters.

It further identified cases of apparent under-reporting of vessel tonnage for trawlers operating in Ghana that impacted licence fees received.

It also identified eight Chinese companies that currently, or in recent past, have beneficially owned industrial trawlers operating under the Ghanaian flag.

According to the report, Ghana’s licensing fees were substantially lower than other coastal states in the sub-region, denying the Country an additional US$ 2.4-6.7 million every year, which should have been the realistic fees for foreign trawlers.

Licence fees are low compared to other countries in the Region and insignificant considering that many trawlers operating in Ghana are beneficially owned by large and in some cases state-controlled Chinese corporations, the report found out that fines given out for illegal fishing were often below even the minimum stipulated by Ghanaian law”, the report stated.

A recent World Bank study found the annual licence fee revenue in Ghana was less than US$600,000 in 2017, while in Sierra Leone, with a similar number of trawlers, it was over US$7 million.

An estimated 90 percent of the Ghanaian trawl fleet is effectively owned by Chinese corporations, despite foreign ownership or control being banned.

To circumvent the law, such corporations operated through local ‘front’ companies, using opaque corporate structures to import their vessels, register and obtain a licence to fish.

“Ghana is grossly undervaluing its fisheries in dealings with these Chinese fishing companies through intermediaries”, the report said.

Even with the 2020 increase in fees from US$ 35 to US$ 135 per gross register tonne per year, the report noted that the annual licence fee for an average 200 GRT trawler was around US$ 30,000, compared to around US$ 119,000 per annum for a foreign trawler of this size operating in Guinea.

Meanwhile, it said a single state-owned Chinese company with trawl operations in Ghana reported operating revenue of around US$ 164.5 million in 2019, receiving subsidies for the development of its overseas fishing operations of around US$3.0 million in that year.

“Licensing revenues in Ghana are a tiny fraction of the value of catches landed by the industrial trawl fleet, the report highlights. Licence fees collected in 2018 represented just 0.4 per cent of the landed value-excluding illegal and unreported catches, which were thought to be substantial. In Sierra Leone this was 7 per cent and 10 per cent in Liberia, figures that are still considered low”.

Fines given out for illegal fishing and other infringements are also much too low. They regularly failed to meet the minimum sums laid out in Ghana’s own legislation and did not meet Ghana’s responsibilities under international law, the report found.

It added that not only has that resulted in unrealised revenue of around US$12 million in 2015 and US$17 million in 2018, but also failed to deter such offenses.

The report noted that trawlers have engaged in widespread illegal fishing in Ghana’s waters, failing to report huge catch volumes to the state and decimating the ‘small pelagic’ fish populations which are reserved for local communities.

As a result of the low level of transparency around vessel ownership, prosecutions fail to target the beneficial owners – often a much larger entity with a controlling interest in the vessel.

Cases are generally heard through opaque out-of-court settlement processes, with fines imposed at well below the statutory minimum and in some cases going unpaid.