She narrowly escaped the UK’s third nationwide Covid-19 lockdown as she jetted off to the United Arab Emirates with her family last month.

And Karren Brady’s daughter Sophia Peschisolido appeared to be having the time of her life as she shared a slew of bikini-clad snaps to her Instagram stories on Tuesday.

The model, 24, looked sensational as she posed in a skimpy pink bikini alongside her pal Savannah as they enjoyed a fun-filled day out on a luxury yacht in Dubai. 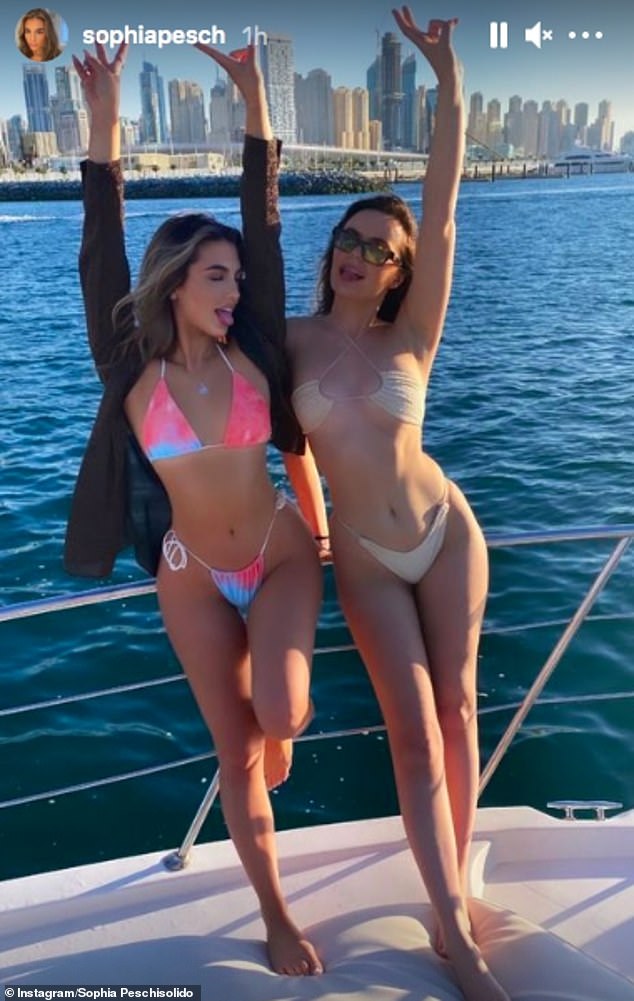 Sun-kissed: Karren Brady’s daughter Sophia Peschisolido seemed to be having the time of her life in Dubai as she shared a slew of bikini-clad snaps to her Instagram stories on Tuesday

She flaunted her enviable physique in the tiny tie-dye two-piece, which she stylishly teamed with a sheer black cardigan.

Sophia added a touch of glamour to her slinky beachwear with a full-coverage make-up palette as she struck a fun-filled pose on the boat’s upper-deck.

She styled her brunette tresses in loose waves across her shoulders as she soaked up the balmy sunshine during the fun-filled day trip on the ocean.

The influencer also shared stunning selfies with her pals, Savannah and Liana, as they enjoyed the luxury Dubai ‘boat trip’. 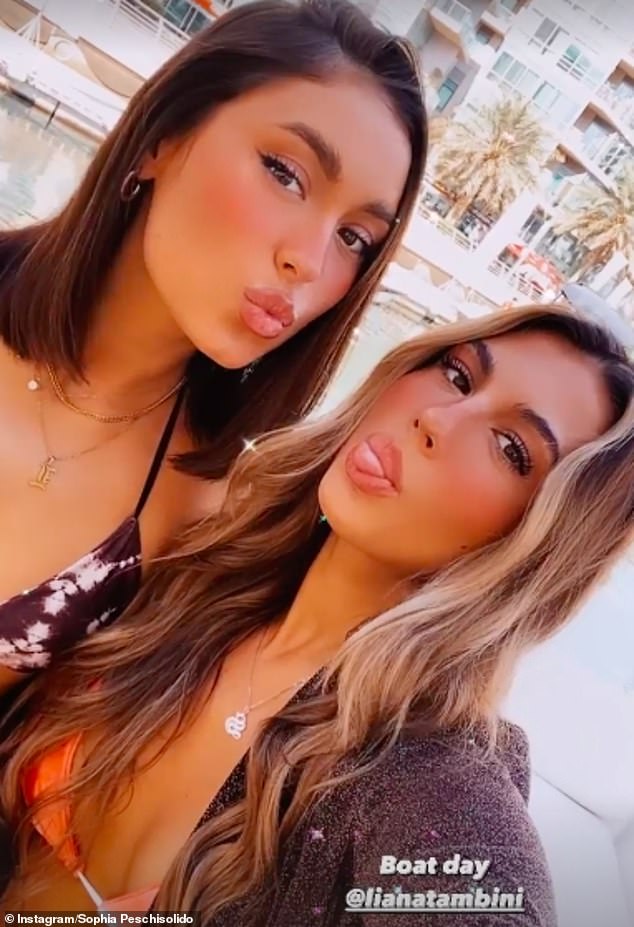 Day trip: The model, 24, looked sensational as she posed in a skimpy pink bikini (right) alongside her pal as they enjoyed a fun-filled day out on a luxury yacht

Wishing her fans a Happy New Year, the Instagram sensation looked incredible in a hot pink bikini as she posed in the sunshine during her Dubai trip.

She has not shied away from sharing floods of sizzling bikini-clad snaps as she soaks up the sun in the United Arab Emirates.

Late last year, Sophie admitted her businesswoman mother Karren, 51, approves of her lingerie and bikini shots, and even gets involved in their development.

Sophia shared in a Q&A: ‘She takes some of my pics for me (not all the time as she’s busy) and I send every pic I post to her beforehand to get her opinion on what to post. 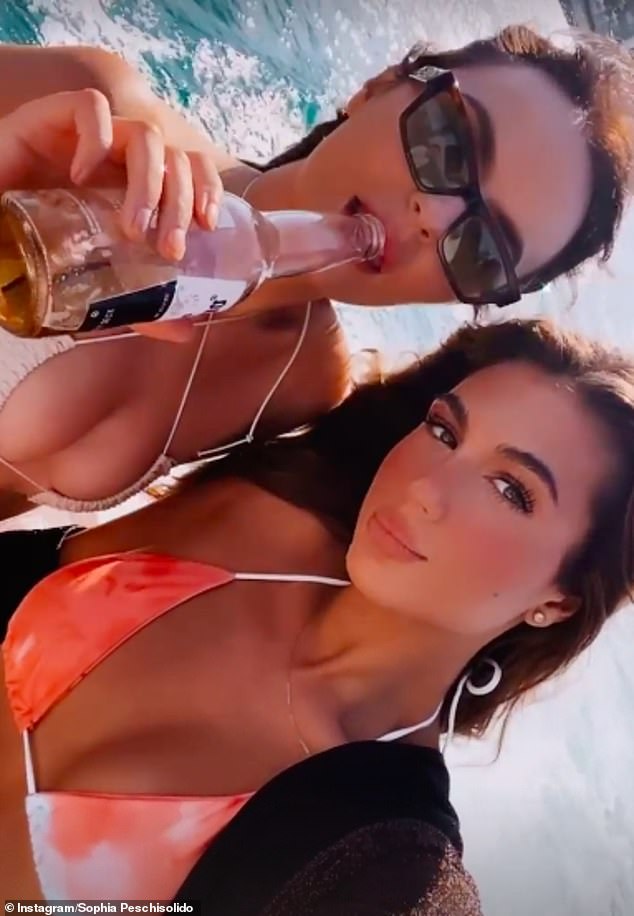 Stunning: Sophia flaunted her enviable physique in the tiny tie-dye two-piece, which she stylishly teamed with a sheer black cardigan

‘She’s very proud of me and she encourages me. she is the best. Blessed with the best parents!!’ (sic)

Elsewhere in her discussion, the Instagram personality spoke about how she deals with social anxiety, a condition she described as her ‘biggest struggle in life’.

The honey-blonde beauty wrote: ‘I’m just trying to push myself out of my comfort zone a little bit at a time. Slow and steady and I just try to reassure myself.

‘Also try talk myself out of panicking. It’s a tough process but we move. Also remembering that you’re not alone and a lot of people suffer with the same thing x.’ (sic) 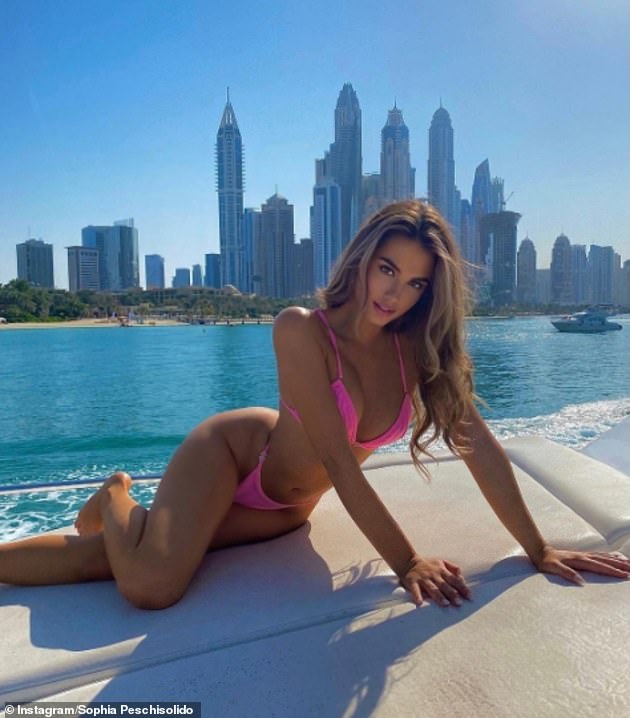 New Year: Her latest posts come after she shared a very racy New Year’s post to social media last week, posing in a hot pink bikini as she posed in the sunshine in Dubai

West Ham United F.C. vice-chairman Karren admitted she regrets taking only three days of maternity leave after the birth of Sophia because she was so desperate to remain at the top of the career ladder.

She previously told HELLO!: ‘That was shameful, really. It was a mistake and most people would look at it with shock, as they should.

‘When you’re young and in a career you don’t realise it will last a lifetime.You think it will slip through your fingers if you take time out.

‘I was trying to do it all, up all night with the baby and at work all day. That doesn’t work.

‘When Paolo was born, I took longer off and worked from home when I could. I tried bringing both children to the office but that didn’t work out. I had to have full-time help in the end.’ 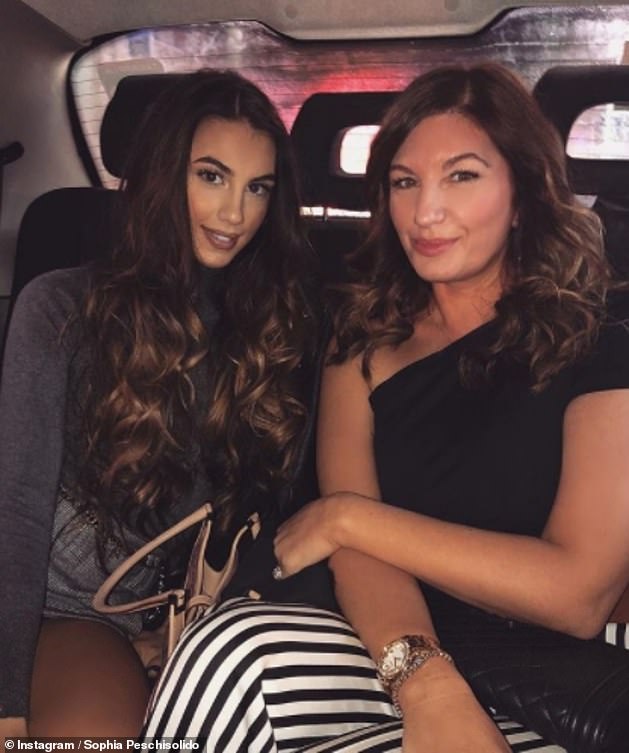 Proud mother: Late last year, the bombshell admitted businesswoman mum Karren, 51, approves of her lingerie and bikini shots, and even gets involved in their development