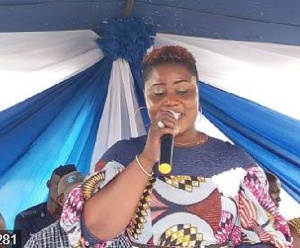 The Jomoro Constituency is one of eight parliamentary seats being contested by the New Patriotic Party.

According to the Deputy General Secretary of the party, Nana Obiri Boahen, the party has filed a suit at the Sekondi High Court seeking to prevent Dorcas Afo Toffey of the NDC from holding herself as Member of Parliament.

The NPP’s stance is premised on two things which it believes are enough to grant them their pleas.

Obiri Boahen told Neat FM in an interview that aside electoral malpractices which benefitted Dorcas Afo Toffey in the elections, the MP’s citizenship status is also an issue.

He revealed that aside being Ghanaian, Afo Toffey has documents that qualifies her to be a citizen of the United States of America and Ivory Coast.

“For Jomoro, there were irregularities in the election. Apart from that, the woman also has Ivorian, US and Ghanaian citizenship,” he said on Neat FM.

Obiri Boahen said that the party has assigned a team of lawyers to each of the eight cases with lawyer Frank Davies as the head of the team.

“We have a legal team headed by Frank Davies who is also part of the president’s team. I’m in charge of the Banda case so I can speak to that,” he said.

Meanwhile, the NDC has also filed petitions at various High Courts challenging eight of the constituencies.