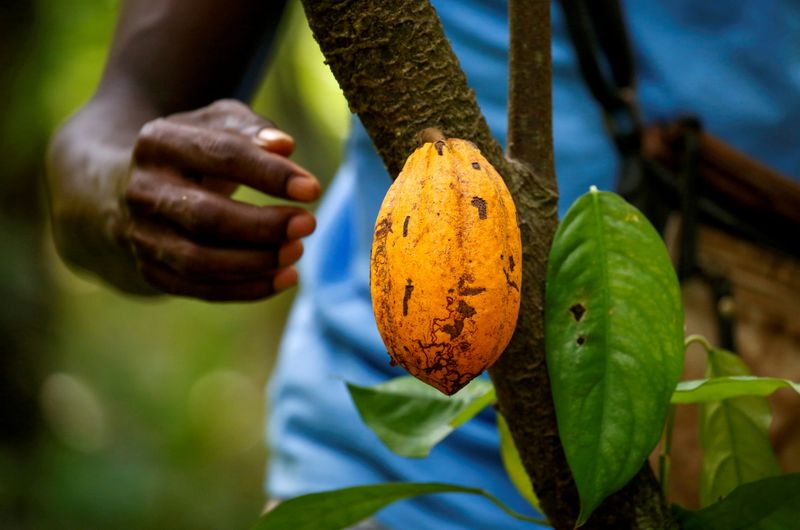 ABIDJAN (Reuters) – Ivory Coast’s cocoa board will allocate a maximum of 200,000 tonnes of cocoa to local exporters this season, half as much as envisaged under a government decree to boost local firms’ competitiveness, five industry sources told Reuters on Thursday.

In May, the government ruled that 20% of cocoa purchases by multinational companies in Ivory Coast should be fulfilled by local firms in an effort to improve competition in the world’s largest cocoa-exporting economy.

This share would have represented more than 400,000 tonnes of beans in the 2021/22 season. But the Cocoa and Coffee Council (CCC) regulator has found it cannot be fully implemented as local exporters do not have the financial or logistical capacity to handle that volume, two sources at CCC said.

“We have started to allocate the volumes of international contracts to local exporters but we realise that they cannot export the 20% that the government has decided to give them,” one of the sources said.

Speaking on condition of anonymity, three local firms said the CCC had informed them local exporters’ share would be capped at 200,000 tonnes.

The decree was meant to change the status quo where major international players use their greater financial muscle to buy and export all available cocoa, while local firms lack access to financing and foreign chocolate makers to compete.

But banks are still wary of financing local exporters even when international contracts are guaranteed, according to the CCC sources and two banking sector sources.

For banks, the main risk lies in the weakness of the supply chain of many local exporters that must be able to secure the necessary volumes in the bush.

“These exporters represent too great a risk for us. They have no collateral and we are not sure that they will be able to buy the cocoa even if we give them the money,” said the credit manager of one of the largest banks financing the cocoa sector.

Another banker said an expected drop in cocoa production this season had raised fears of stiff competition on the ground for beans, which will disadvantage small exporters.

“Under these conditions the small ones are a risk for us,” the source said.

As a result, the CCC may reallocate international contracts from some local exporters, a third CCC source said.

“We can’t risk local exporters defaulting so we are studying the possibility of cancelling the contracts of those who do not have financing and giving them to those who have financing,” the source said.

Previous articleDubai: schools are almost back to pre-Covid normal
Next articleHuawei Global Digital Power Summit 2021 set to open on October 16 in Dubai