Investments in Bahraini, Saudi and UAE fintech scene picking up

Global professional services firm KPMG has released its mid-year analysis of the deals landscape in the fintech scene. A round-up of the report’s findings for three key Middle East markets.

Worldwide, investments in fintech (the abbreviation for financial technology) saw a remarkable rebound in the first half of 2021, jumping to $98 billion from $87 billion in the second half of 2020. Dry powder cash reserves, Covid-19-induced digital acceleration, increasing diversification in hubs and subsectors, and robust economic activity contributed to the record start to 2021,” explained the KPMG report.

The Americas accounted for $51.4 billion of fintech investment in the first two quarters of 2021, followed by the Europe, Middle East and Africa (EMEA) region at $39.1 billion.

The fintech market in Saudi Arabia is described by KPMG as still in its infancy, although a growing number of fintechs are attracting the attention of private equity groups, venture capitalists or corporates — primarily at the earliest of deal stages.

In January this year, Saudi Arabia saw its largest Seed round ever (a $6 million raise by ‘buy now, pay later’ company Tamara), and in April, the Kingdom saw its first ever $100+ million venture capital round when the same Tamara raised $110 million in Series A capital.

Banks in Saudi Arabia are playing a driving role, stepping up their interest in fintechs as a means to digitise their services – such as Banque Saudi Fransi’s partnership with Hala to offer its customers a digital wallet on their mobile phones. 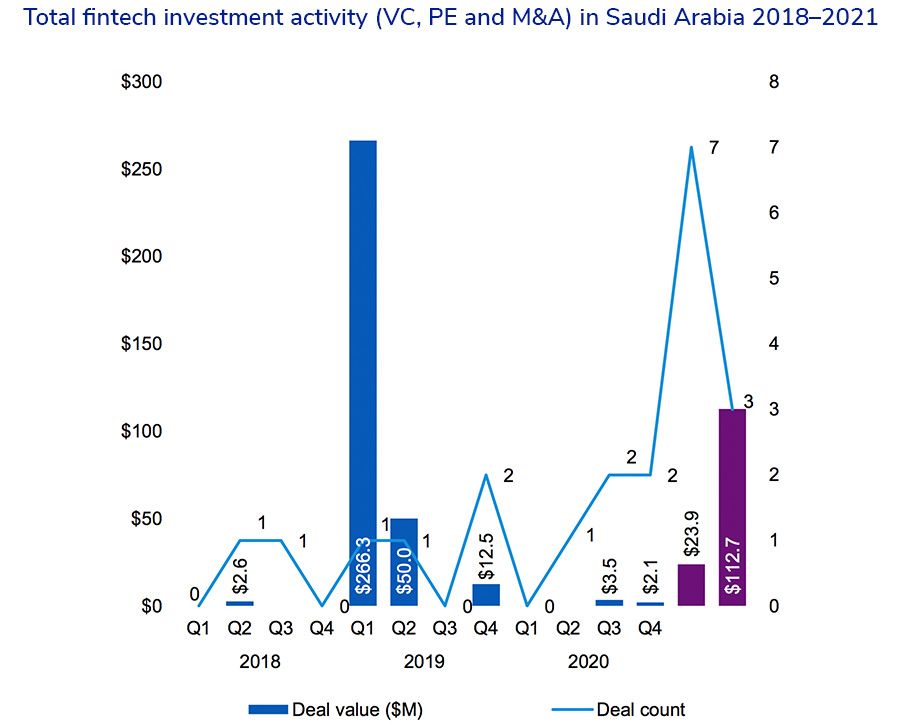 The Saudi Central Bank’s fintech sandbox has been a major driver for innovation said Ovais Shahab, Head of Financial Services at KPMG in Saudi Arabia, allowing fintechs the opportunity to test their new digital solutions, with a number of early sandbox participants now starting to mature.

“There is a lot of diversity in the sandbox program. While the majority are payments-focused fintechs, we are also seeing fintechs focused on remittances, point-of-sale devices, small mom and pop stores offering digital payments. Tamara is a sandbox success story.”

The UAE notably reached the EMEA top 10 fintech deals list with, thanks to the $800 million private equity investment by Silverlake into Abu Dhabi based Group 42 (an AI driven cloud computing companies that focuses on digitisation of businesses). Other major EMEA transactions included the $800 million buyout of InvestCloud by Motive Partners and Clearlake Capital, and the $600 million buyout of Ireland-based Fenergo by Astorg and Bridgepoint.

Meanwhile, the UAE saw the announced launch of its first independent digital bank (Zand), while international interest in the region as a fintech hub continued to grow, with both Ireland-based regtech company DX Compliance and US-based payments firm Stripe launching operations in the region during the first half of 2021.

Gonçalo Traquina, a Partner at KPMG in the Lower Gulf commented: “Accelerators and events are an important part of building up the UAE fintech ecosystem. H1’21 saw some interesting developments in this area. The Ministry of Economy and the Securities and Commodities Authority launched a Fintech Megathon to help reimagine financial services in the UAE. Hub 71 and Modus Capital also launched Ventures Lab – a program aimed at helping early stage founders build viable products.”

Reflecting on the developments in Bahrain, Manav Prakash, a Partner at KPMG in Bahrain, said: “Investments towards digital transformation and digitalisation have been increasing significantly across key economic sectors, and quite specifically within the financial services sector. We are witnessing significant investments in this space in Bahrain, and a significantly increased collaboration between traditional players and fintech.”

Looking ahead, KPMG’s pan-continental team of authors expect fintech investment to remain “very robust in most regions of the world”, with fintechs focused on payments, financing solutions, banking-as-a-service models and B2B services predicted to enjoy the most interest in the coming six months.